Delivering accurate spirals with plenty of zip while pushing the defending Super Bowl champion Tampa Bay Buccaneers to the brink, New England Patriots rookie Mac Jones’ impressive performance in a losing cause opened a lot of eyes around the NFL.

“Mac Jones? Really good young quarterback,” an NFL scout said in a text message. “I like everything about him. He’s for real.” 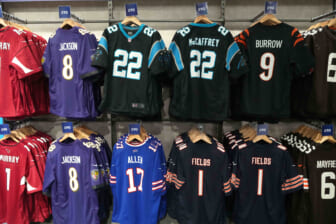 Also Read:
Top-selling NFL jerseys: Ja’Marr Chase’s No. 1 is a popular item ahead of holiday season

Jones’ accuracy and poise during a last-second loss to the Buccaneers last Sunday night was quietly a big deal.

The replacement for former NFL Most Valuable Player Cam Newton served notice that the Patriots have a legitimate quarterback for the future one year after Brady left to join the Buccaneers.

Jones’ steady approach and keen knowledge of the game are making a difference for a 1-3 Patriots team that lacks a strong running game. Although most of Jones’ passes are short to intermediate throws, he’s completing them and moving the chains heading into Sunday’s game against the 1-3 Houston Texans.

“Just keeping in mind that they have a rookie quarterback, I’m sure they want to make quick throws, keep his confidence level high,” Texans veteran safety Justin Reid said. “He did a tremendous job in my opinion against the Buccaneers, the game that they came off of. So, that game is just dink and dunks,. don’t think will kill you. And there’s some trap plays that you can set up for that, too, if that’s what they want to do the entire game. But I don’t think that those plays kill you.

“You’ve just got to be disciplined for when the real opportunities come.” 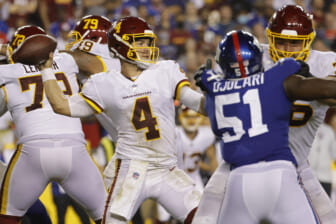 A former national championship winner at Alabama, Jones completed 31 of 40 passes for two touchdowns one interception. At one point, he completed 19 passes in a row.

“Seeing what he’s done in the NFL, for you to come into an NFL camp and to be a game-day starter, that tells you an awful lot in a program like theirs,” Texans defensive coordinator Lovie Smith said. “Any program, for a rookie to play and to play at the level that he has, I think all the different challenges that have been put in front of him, he’s handled them all well right up until primetime Sunday night in that environment. He can make all the throws. I’m told he’s a smart player. His play, just watching on video, says that. He’s running their offense and running it well, and it’ll be a good challenge for us.”

Although Jones was hit 12 times and sacked four times against the Buccaneers, he stood tall in the pocket and kept firing away.

Jones has completed 70 percent of his throws, has four touchdowns, four interceptions and 6.3 yards per attempt.

Jones isn’t a game-changer yet, but he’s part of the Patriots’ solution and not a problem.

“He doesn’t seem to play ‘hero ball,'” Edelman said. “”He’s not a guy that’s going to try to win you the game. He’s going to take what the defense gives you, I think that paired with Josh McDaniels in New England.

“I know they’re not where they want to be, I know they didn’t win the game, but this was a huge confidence-builder for the New England Patriots seeing how Mac Jones played. The lights weren’t too bright for him.”

–Aaron Wilson has covered the NFL for 20 seasons, including the Texans, Baltimore Ravens, Tennessee Titans and Jacksonville Jaguars. He has previously written for The Houston Chronicle and The Baltimore Sun. He’s on Twitter: @AaronWilson_NFL and Instagram: @aaronwilson7128.