In the latest move to follow in Tom Brady‘s footsteps, New England Patriots rookie quarterback Mac Jones is hoping to capitalize on his persona just the same as the GOAT. According to Nicole Yang of the Boston Globe Jones recently filed a trademark via “Mac 10 Enterprises” to the U.S. Patent and Trademark Office for “MJ10”.

If approved, Jones will look to sell clothing, accessories, and other memorabilia representing the MJ10 brand that he hopes to continue popularizing. As long as Jones, the leading 2021 AP NFL Rookie of the Year candidate, continues to play well, you’re likely to see MJ10 apparel at Patriots games, in addition to his popular Patriots No. 10 jersey.

Clearly hopping on the TB12 bandwagon, Jones simply wants to beat anyone else to the punch. If anyone is going to profit off his name, his number, his likeness, it’s going to be him. No one should blame him for that. If anything, he deserves some credit for being forward-thinking, yet confident in his abilities. 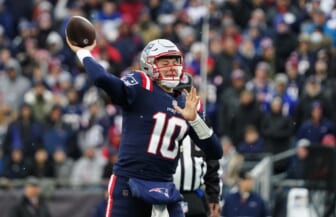 Maybe Jones is realizing he has a knack for this football thing. Jones ranks third among all NFL quarterbacks in 2021 with a 70.3% completion rate and is currently on pace to break Cowboys QB Dak Prescott’s rookie record of 67.8% set in 2016.

Hey, if TB12 can do it, why can’t I? While doing so humbly, that’s been the attitude for MJ10 in his first season in Boston. So far, so good with the Patriots at 8-4 and in first place of the AFC East.

We have yet to hear Bill Belichick’s thoughts on the matter. Heck, he might have even encouraged the wise business move, who knows? Chances are “The Hoodie” could care less as long as Jones can still come up with a win on game day.