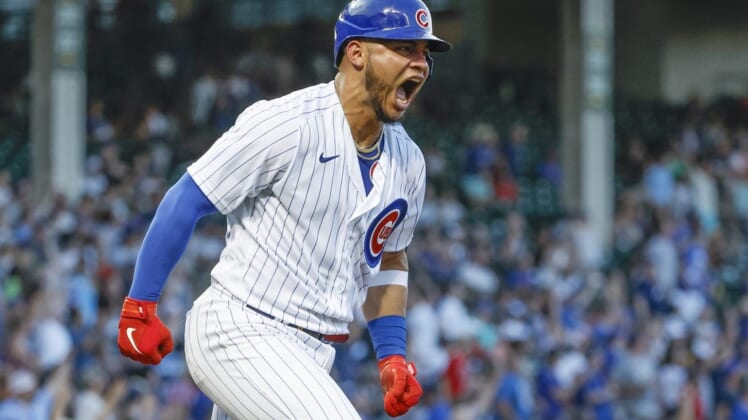 Luke Voit hit a two-run homer and a go-ahead, three-run double, as the visiting San Diego Padres overcame a five-run hole to beat the Chicago Cubs 12-5 on Tuesday.

The Cubs took their eighth consecutive defeat while the Padres won for the ninth time in 12 games.

Jake Cronenworth added three hits, Nomar Mazara had two hits and three RBIs and Jorge Alfaro homered late for San Diego, which scored four runs in the sixth inning and six in the seventh. Off to the franchise’s best start (39-24), the Padres have also won a season-high five straight on the road, where they are a National League-best 22-11.

Willson Contreras homered for two of his three hits and had three RBIs for the Cubs, who have been outscored 65-21 during their season-worst skid. Chicago has dropped four straight at home, where it is 11-22.

Stymied for five innings, San Diego awoke after Chicago starter Kyle Hendricks was pulled following Cronenworth’s double to open the sixth. Making his first start since June 1 after recovering from a shoulder issue, Hendricks was charged with one run while allowing four hits and no walks. He struck out six.

Chris Martin replaced him in the sixth and gave up the two-run homer to Voit and later an RBI single to Mazara. Scott Effross then allowed a run-scoring single to Ha-Seong Kim to make it 5-4.

Effross yielded back-to-back singles to Trent Grisham and Cronenworth to open the seventh. Mychal Givens then walked Manny Manchado to load the bases, which were cleared on a double to right by Voit. Mazara lined a single to right off Brandon Hughes that scored two, and Kim’s sacrifice fly gave San Diego a 10-5 lead.

Contreras went deep into the right field bleachers off San Diego’s Sean Manaea in the first. With a man on in the third inning, Contreras drove a towering shot over the left field ivy. Chicago added another run with Nico Hoerner’s RBI triple in the fourth, and the Cubs made it 5-0 on Frank Schwindel’s run-scoring groundout in the fifth.