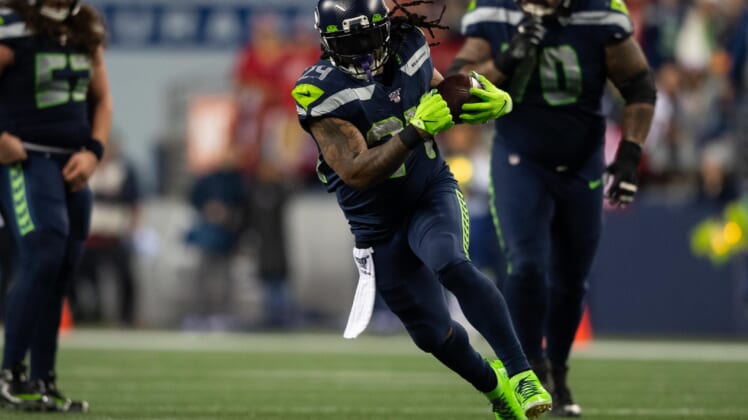 Carolina Panthers linebacking legend Luke Kuechly recently ranked the five hardest players he ever tried to tackle, and the man known as “Beast-Mode,” Marshawn Lynch, was at the top of that infamous list.

Kuechly is not just the best linebacker in the Panthers’ history, he is one of the very best to play the position over the last 20 years. In every single season of his eight-year run in the NFL, he racked up well over 100 tackles and peaked in his rookie season with a ridiculous 164 combined. Meaning, that it is safe to say the five-time All-Pro has an elite understanding of the art of tackling at the highest levels of the sport.

That’s why during an appearance on ESPN’s “NFL Live” the 2013 defensive player of the year was asked to rank the five players that he feels are the absolute toughest in the league to wrestle to the ground. Most of the five he played with, however, the retired defensive great also used his expertise to add a couple he faced on a limited basis or never got the opportunity to compete against.

In the fifth spot, he chose Cleveland Brown running back Nick Chubb, followed by fast-rising Indianapolis Colts star Jonathan Taylor, and then Tennessee Titans power back Derrick Henry at three. In the second spot was a player he battled against many times. New Orleans Saints multi-purpose running back Alvin Kamara.

“He’s so difficult because he can align in different spots in that Sean Payton offense. And with Kamara, I think he’s one of those guys that invites contact,” Kuechly explained. “He wants guys on his body, he wants guys close to him. It’s almost like he’s covered in grease. Guys slide right off him. I wouldn’t necessarily say he’s super sudden as much as he is smooth and has great flow.”

However, when it comes to who was the absolute toughest for the man with 1,092 NFL tackles to wrangle, Seattle Seahawks legend Marshawn Lynch earned the top spot easily.

“The last guy’s one of my favorite guys I ever played against — Marshawn Lynch,” Kuechly said. “He’s got the full package. Big, strong, physical. But his running style is relentless. I always tell everybody when we played Marshawn, the most important thing for us was to get bodies around him. Just how he’s built physically, from his waist size to his chest size, and how powerful he is. He invites contact, he can sink, and then get off it. What makes him so difficult is his power, his speed, and his ability to keep guys away from him.”

Luke Kuechly retired from the league in 2020 due to the early onset of Chronic Traumatic Encephalopathy (CTE). After retiring in 2019, and then returning a year later, Lynch officially ended in NFL career in 2019 after two seasons with the Raiders.