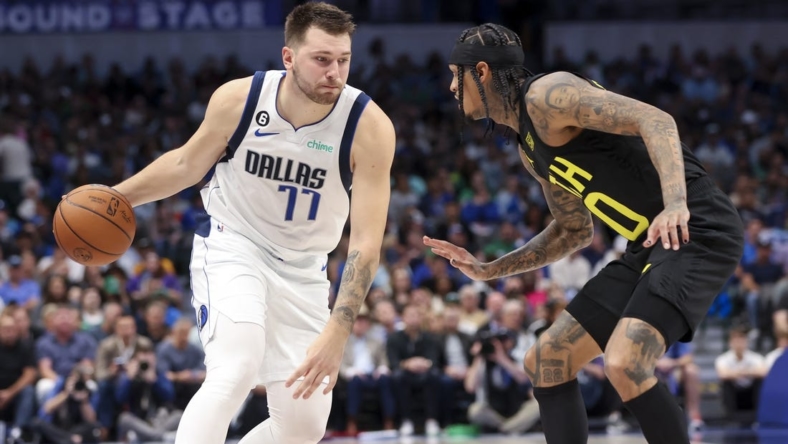 Jordan Clarkson finished with 22 points on four 3-pointers and eight assists to lead the Jazz, but he missed a game-tying attempt in the last second as Utah began a three-game road trip with a defeat.

Collin Sexton totaled 19 points and gave Utah a chance at forcing overtime after scoring to make it a 3-point game with 29.2 seconds left and then snaring a rebound with 6.7 seconds to go.

Wood and Josh Green responded with 3s as the Mavericks went up 86-84, taking their first lead since the first quarter.

Doncic hit a floater with 2:55 remaining for a six-point lead and then grabbed a key rebound. The NBA’s leading scorer has scored at least 31 in all seven Dallas games.

That feat makes Doncic just the third player in NBA history to record 30+ points in each of the first seven games of the season, and the first to do it since Wilt Chamberlain in the 1962-62 season. Chamberlain also pulled it off in 1959-60, along with Jack Twyman the same season.

Utah made a final surge to pull within two after a Markkanen jumper with 58.6 left.

Reggie Bullock then picked a great time to hit his first shot, draining a 3-pointer with 35.5 remaining to give the Mavs a 103-98 lead.

Doncic had a quiet first quarter with just five points, but he heated up in the second quarter and finished the half with 18. He tied the game at 47-47 with a drive late in the first half as Dallas surmounted a 14-point deficit.

The Jazz scored the final eight points of the first quarter for a 35-23 lead and went into halftime ahead 50-47 after a three-point play by Markkanen.

Clarkson fueled a 14-0 run for Utah in the third, but Dallas cut the lead to four heading into the fourth quarter.