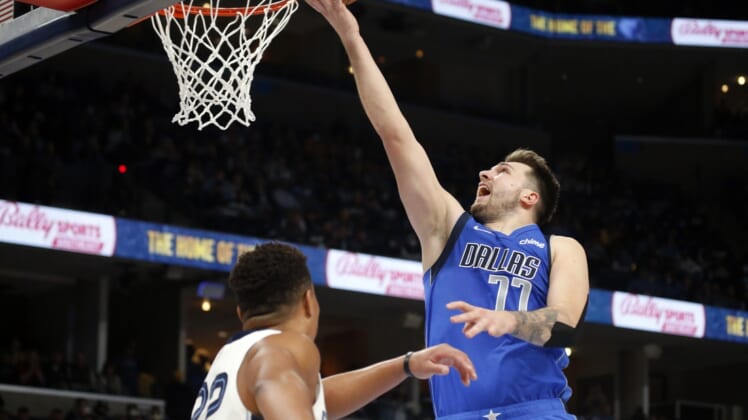 Luka Doncic recorded 27 points, 12 rebounds and 10 assists for his 40th career triple-double as the Dallas Mavericks rolled to a 112-85 road victory over Memphis on Friday night to halt the Grizzlies’ franchise-record winning streak at 11 games.

Tim Hardaway Jr. scored 16 points, Jalen Brunson contributed 15 points, nine assists and a career-best five steals for Dallas, which won for the seventh time in its past eight games. The Mavericks outscored Memphis 62-30 in the second half.

Doncic achieved his fourth triple-double of the season with a splendid behind-the-back bounce pass to Powell, who laid it in to make it 99-79 with 5:58 left in the game.

Doncic departed at that point and Dallas scored the next 11 points to cap a 17-0 burst and increase the advantage to 110-79 with 2:15 remaining.

The Mavericks were without Kristaps Porzingis (COVID-19 protocol) for the seventh straight game.

Dallas outscored the Grizzlies 34-18 in the third quarter to turn a five-point halftime deficit into an 84-73 lead.

Memphis led 62-54 after Brandon Clarke’s basket with 10 minutes left in the period before the Mavericks tallied the next nine points, taking the lead on Doncic’s basket with 7:37 remaining.

Anderson connected on a 3-pointer to pull the Grizzlies within 79-73 with 1:33 to play.

Doncic responded by scoring the final five points of the third quarter and the first four of the final stanza to give the Mavericks a 15-point lead. Hardaway capped the 12-0 burst with a 3-pointer to make it 91-73 with 9:58 remaining in the contest.

Morant outscored Doncic 15-9 in the first half as the Grizzlies held a 55-50 lead at the break.