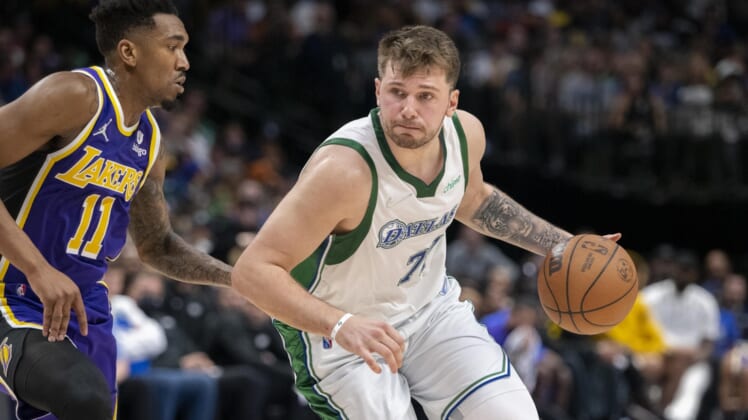 Luka Doncic collected 34 points, 12 rebounds and 12 assists through three quarters to fuel the host Dallas Mavericks to a 128-110 wire-to-wire victory over the short-handed Los Angeles Lakers on Tuesday.

Doncic made 12 of 23 shots from the floor — including four 3-pointers — before sitting out the entire fourth quarter. The triple-double was Doncic’s 10th of the season and 46th career.

Dallas recorded its fourth win in a row at home and 19th in its last 23 to move within one game of the third-place Golden State Warriors in the Western Conference.

Malik Monk scored 28 points and Russell Westbrook added 25 for the Lakers, who have lost three in a row. Los Angeles fell below idle San Antonio (31-44) — via tiebreaker — into 11th place in the Western Conference.

Davis Bertans had four 3-pointers to finish with 14 points for the Mavericks. Spencer Dinwiddie had 13 points while Josh Green, Dwight Powell and Jalen Brunson each added 12.

Doncic scored 15 of his team’s first 23 points as Dallas bolted out of the blocks in the first quarter. Bullock buried back-to-back 3-pointers, Green added one of his own and Maxi Kleber made a layup as time expired to stake the Mavericks to a 43-25 lead at the end of the quarter.

Dallas continued its sharpshooting to seize an 82-56 lead at intermission. The Mavericks’ point total was their most in any half this season.

Doncic secured his triple-double after recording an offensive rebound and putback to stake the Mavericks to a 101-65 lead with 6:58 remaining in the third quarter.

Dallas, which led by as many as 37 points, put it on cruise control the rest of the way.