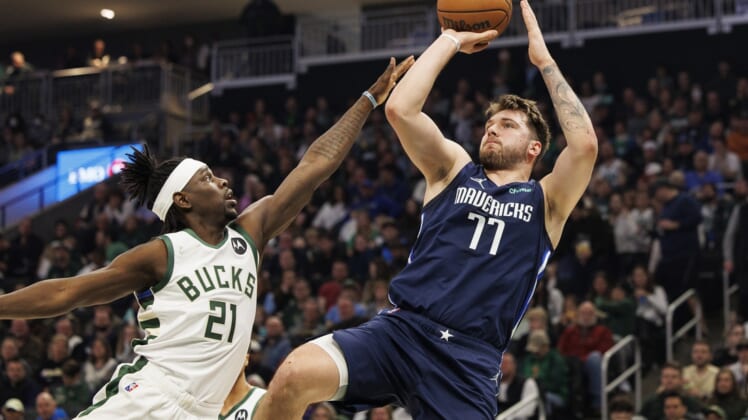 Luka Doncic recorded his third double-double in the last four games as the visiting Dallas Mavericks beat the Milwaukee Bucks 118-112 on Sunday afternoon to avoid getting swept in the two-game season series.

Doncic poured in 32 points, matched his season high of 15 assists and collected eight rebounds on 9-of-22 shooting to lead the Mavericks (49-30) over Milwaukee. Dwight Powell supplied 22 points and 13 rebounds and Reggie Bullock chipped in 16 points.

Giannis Antetokounmpo paced Milwaukee (48-30) with 28 points and 10 rebounds on 12-of-22 shooting to post his seventh consecutive double-double.

Doncic and Spencer Dinwiddie each had 11 points, and Doncic also added six assists and three rebounds. Powell went for 10 rebounds and seven assists, and Dallas shot 52.4 percent from the field (22 of 42) as a team.

Antetokounmpo led all scorers with 12 points on 6-of-11 shooting. Holiday was the only other player to score in double figures for the Bucks with 11, and Portis added eight.

Milwaukee struggled to get to the charity stripe through the first 24 minutes of action, as it only had two free throw attempts compared to Dallas’ eight.

The Bucks seemingly took control of things in the third after a 14-0 run that put them up by five, but the Mavericks dominated the remainder of the frame to carry a 90-87 lead into the fourth.

Holiday was in the zone in the first quarter, posting 11 points on 4-of-5 shooting. Milwaukee was also firing on all cylinders from beyond the arc, drilling eight 3-pointers to jump out to an early eight-point lead.