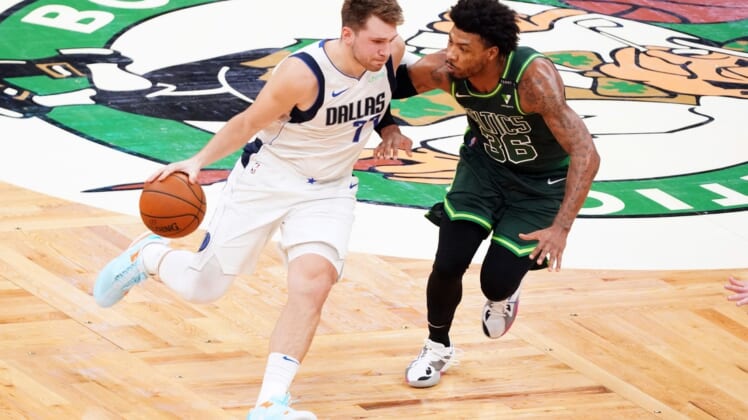 Doncic sunk seven 3-point attempts and shot 11-of-15 on the night as the Mavericks won for the fourth time in their past six games. Kristaps Porzingis had 19 points, and Dorian Finney-Smith scored 11 with nine rebounds.

Jayson Tatum had 25 points, Jaylen Brown 24 and Kemba Walker 22 for the Celtics, who lost their second straight and have dropped seven of 10. Marcus Smart added 17 points.

Boston trailed by 23 with 7:52 left in the third quarter and entered the fourth down 90-73. A hot start to the final period had the Celtics within single digits, 96-87, on a Walker three-point play with 9:13 remaining. The deficit was trimmed to seven on a Walker technical free throw with 6:52 to go.

Finney-Smith responded with a 3-pointer, but back-to-back buckets from Tatum made it a six-point game with 3:46 left.

Doncic and Brown traded threes, and Dallas led by eight with 36.8 seconds remaining. After a Walker three got Boston within 109-105, a Tatum steal and Smart tip-in on the other end made it a two-point game.

Down three with 5.4 seconds left, the Celtics couldn’t get possession on a missed free-throw attempt by Smart and came up short.

The Mavericks never trailed and led 30-25 after one. The Celtics cut their deficit to three, 35-32, before Dallas took control.

Finney-Smith and Nicolo Melli hit back-to-back 3-pointers for a nine-point advantage. Up by 10 with four minutes left in the half, Doncic, Josh Richardson and Brunson each hit from deep to extend the lead to 56-37.

Doncic then hit three consecutive field-goal attempts, two of them from 3-point range, to help Dallas enter the break up 64-45.

Doncic had 24 points at halftime on 5-of-6 shooting from behind the arc. His sixth 3-pointer gave the Mavericks a 72-51 lead in the third.