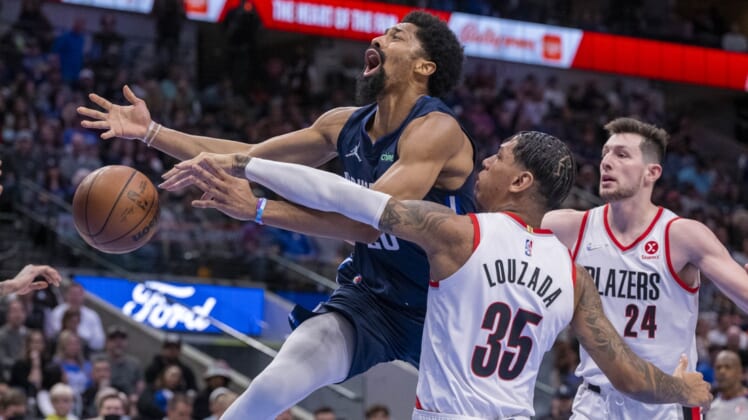 Luka Doncic poured in 39 points in just 30 minutes Friday night and the Dallas Mavericks kept their hopes alive of finishing third in the Western Conference with a 128-78 shellacking of the visiting Portland Trail Blazers.

Dwight Powell continued his near-perfect shooting of late with seven consecutive hoops on an 18-point night as the Mavericks (51-30) moved within a half-game of the Golden State Warriors (51-29) entering the final weekend of the NBA regular season.

The Mavericks, who have just one game remaining, can catch the Warriors — and thus finish third in the West through a tiebreaker — either with a win at home Sunday against the San Antonio Spurs coupled with one Golden State loss in its final two games, or with two finishing losses by the Warriors should Dallas lose to the Spurs.

Dallas wasted little time taking control over the Trail Blazers, who were playing the second night of a road back-to-back, running out to leads of 9-2, 16-4 and 24-8 en route to a 36-13 advantage after one period.

The game became a bench-clearing affair after that, with 21 of the 23 players in uniform getting into the scoring column.

Doncic also found time to lead all rebounders with 11 and everyone in assists with seven. The double-double was his 44th of the season.

Doncic, however, also received his 16th technical foul of the season, triggering an automatic suspension for Sunday’s game unless the NBA office rescinds the technical foul called against him in the first quarter.

Powell’s 7-for-7 night made him 21-for-23 over the course of the Mavericks’ current three-game winning streak. Dallas outshot the visitors 53.2 percent to 37.3 percent in the blowout.

Dorian Finney-Smith added 15 points and Spencer Dinwiddie 14 for the Mavericks, who swept Portland 3-0 in the season series.

Both the 50-point margin of victory and the 78 points allowed were season-bests for the Mavericks, who hadn’t previously held an opponent under 82 points this season.

Drew Eubanks had 18 points, Ben McLemore 14 and Keon Johnson 10 for the Trail Blazers, who dropped their 10th straight.

The 78 points were a season-low for Portland, which had been held to 81 twice previously.