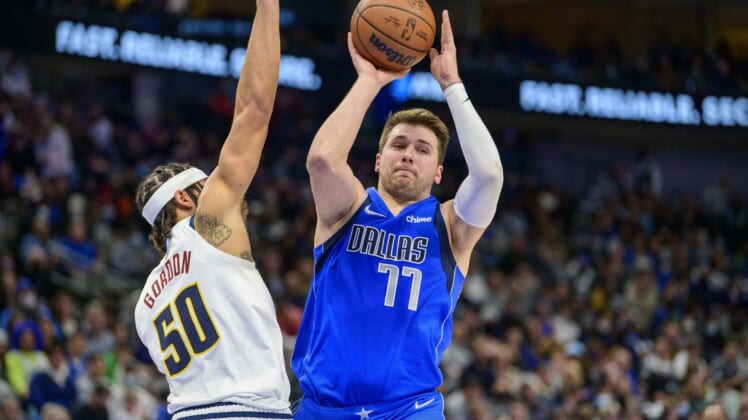 Luka Doncic had 21 points and 15 assists, Reggie Bullock and Dwight Powell each scored 15 points and the host Dallas Mavericks beat the Denver Nuggets 103-89 on Monday night.

Jalen Brunson scored 13 points and Maxi Kleber and Dorian Finney-Smith had 10 points apiece for the Mavericks, who have won three straight.

Nikola Jokic had 27 points and 16 rebounds, Aaron Gordon scored 15 points and Will Barton added 12 for Denver, which was missing several players and two coaches.

The Nuggets were still without head coach Michael Malone, assistant coach David Adelman and forwards Jeff Green and Zeke Nnaji due to health and safety protocol. Bones Hyland cleared protocol earlier in the day and flew to Dallas to join the team. He had seven points in 25 minutes.

The Nuggets trailed 62-49 during the third but clawed their way back. Six points by Jokic and Barton’s 3-pointer trimmed the deficit to 64-61 with 2:27 left in the period, and they trailed by six heading into the fourth.

Facu Campazzo was fouled on a 3-point attempt and made all three free throws to get Denver within 71-68 early in the fourth.

Then Doncic hit a jumper, Tim Hardaway Jr. converted a three-point play and Powell had a 3-pointer and two free throws in a 10-4 that made it 81-72 midway through the quarter.

Two free throws by Jokic cut the deficit to eight but Bullock hit two 3-pointers and Brunson another to make it 95-80 with 2:12 left.

Denver was able to build an early lead, but when Jokic went out late in the first quarter the Mavericks scored 13 straight points to take a 31-20 lead early in the second. The Nuggets got within 36-29 midway through the period but Dallas went on an 8-2 run to lead by 13 and took a 46-37 advantage into halftime.