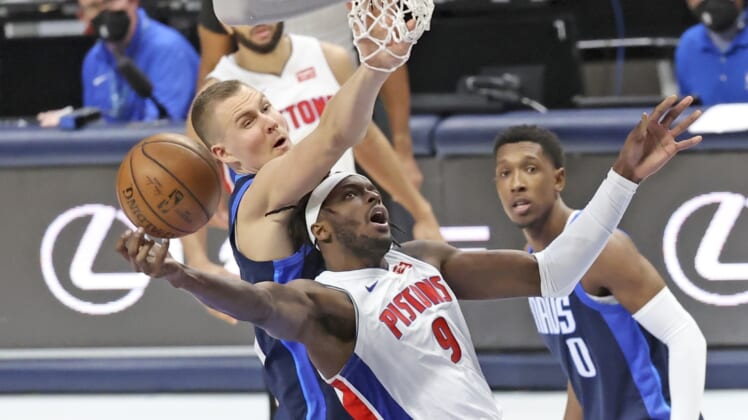 Luka Doncic came within one assist of a triple-double with 30 points and 10 rebounds, Jalen Brunson came off the bench to add 20 points, and the host Dallas Mavericks pulled out of a losing skid Wednesday with a 127-117 defeat of the Detroit Pistons.

The Mavericks (31-26) came into Wednesday’s matchup with losses in four of their previous five games, including the first two to start their five-game homestand.

Dallas trailed the Pistons, who sit last in the Eastern Conference, for stretches in the first half before breaking the game open just before intermission.

A 12-2 run to close the second quarter gave Dallas a lead it held throughout the second half. Brunson ignited the decisive spurt, scoring 9 of 11 points for the Mavericks over a 1:50 stretch.

Brunson shot 8-of-12 from the floor overall as the Mavericks went 46-of-92 (50 percent) as a team. Detroit slightly outshot Dallas at 50.6 percent, but made six fewer field goals.

The Mavericks grabbed 11 offensive rebounds, which they converted into a 21-12 edge on second-chance points.

Dallas also capitalized on 14 takeaways with a 17-9 advantage in points off turnovers. The Mavericks also outscored the Pistons 52-40 in the paint, and 13-4 on fast-break opportunities.

Kristaps Porzingis scored 19 points for Dallas, Josh Richardson added 12, Dorian Finney-Smith registered 11 and Tim Hardaway Jr. chipped in 15 off the bench. The Mavericks lost Maxi Kleber to an apparent lower back injury after he drew a charge in the first half.

Detroit (18-41) trailed by as many as 17 points in the fourth quarter, but pulled within eight on a pair of Cory Joseph free throws with 3:26 remaining. Joseph matched a season-high with 24 points, and Jerami Grant led the Pistons with 26 points.

Mason Plumlee grabbed a game-high 16 rebounds to go with 13 points. Wayne Ellington and Saddiq Bey added 11 points in the loss.