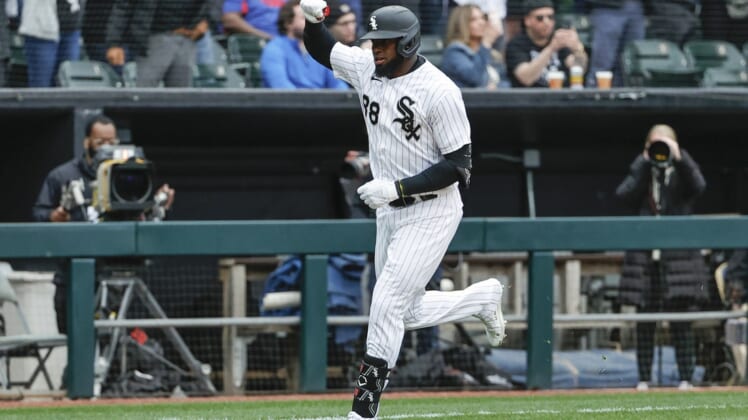 Luis Robert hit a go-ahead home run off rookie Matt Brash in the sixth inning and the Chicago White Sox celebrated their home opener with a 3-2 win over the visiting Seattle Mariners on Tuesday.

Reynaldo Lopez (1-0) pitched 1 2/3 innings for the victory. Liam Hendriks allowed a run in the ninth before striking out Mitch Haniger with two runners on for his first save.

Seattle lost its third straight despite an impressive major league debut by Brash (0-1), who allowed two runs on four hits over 5 1/3 innings. He walked one and struck out six.

Chicago broke a 1-1 deadlock with the bases empty and one out in the sixth. Robert deposited Brash’s 2-2 curveball over the right-center field wall for his first homer of the season.

The Mariners began the scoring with one out in the second on Eugenio Suarez’s first homer with his new team, a 364-foot blast to left field off Vince Velasquez.

Chicago pulled even in the third inning. Josh Harrison drew a one-out walk, moved to second on Reese McGuire’s single and scored when Tim Anderson’s grounder was mishandled by shortstop J.P. Crawford.

Seattle threatened with runners at first and second with two outs in the seventh, but Aaron Bummer struck out Jesse Winker to end the inning.

Chicago turned back the Mariners again in the eighth. Abraham Toro doubled with one out but was stranded after Kendall Graveman got Suarez to ground out before striking out Jarred Kelenic.

Kelenic went 0-for-4 with four strikeouts and is 1-for-15 with nine strikeouts to begin the season.

Chicago moved ahead 3-1 in the eighth when Robert drew a leadoff walk, stole second and third, and scored on Eloy Jimenez’s groundout.

Seattle rallied in the ninth and cut the deficit to 3-2 on Winker’s two-out RBI single before Hendriks’ three-pitch strikeout of Haniger preserved the result.