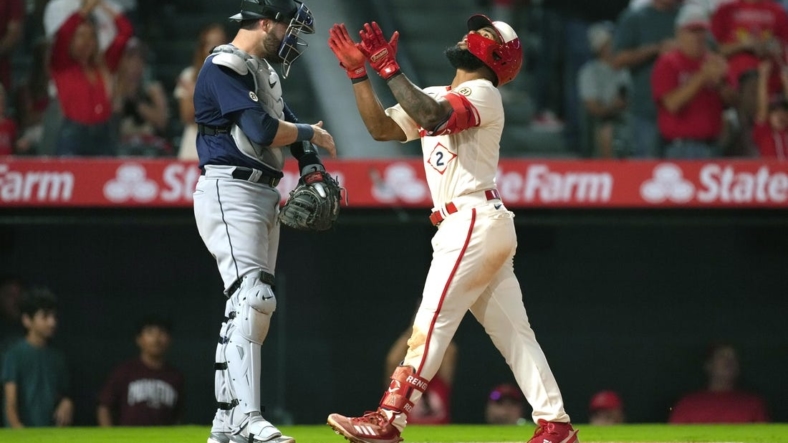 Luis Rengifo homered from both sides of the plate, singled, drove in four runs and scored three during the Los Angeles Angels’ 8-7 victory over the Seattle Mariners on Friday night in Anaheim, Calif.

The teams combined for seven home runs in the game, Mike Trout hitting No. 36 of the season for Los Angeles while Seattle got two homers from Carlos Santana and one each from Julio Rodriguez and Ty France.

The loss dropped the Mariners (80-63) one game behind the Toronto Blue Jays (82-63) for the top American League wild-card position and left them a half-game ahead of the Tampa Bay Rays (80-64) for the second of three spots.

Ryan Tepera, the last of five Angels relievers, pitched the ninth and picked up his third save of the season despite allowing Santana’s second homer.

Rodriguez hit Lorenzen’s third pitch of the game for a home run leading off the first inning, but the Angels responded in the bottom of the first against Ray.

Rengifo led off with a single and one out later went to third on a double by Shohei Ohtani. Both runners scored on a single by Taylor Ward, putting the Angels up 2-1.

It stayed that way until Rengifo hit his first homer of the night, batting right-handed, hitting Ray’s first pitch of the third inning for a 3-1 lead. The Angels added a second run in the inning when Ward hit a two-out double and scored on a single by Matt Duffy.

The Mariners narrowed the deficit to 4-3 in the fourth on a two-run homer from Santana.

Trout homered leading off the bottom of the fifth to make it 5-3, but the Mariners scored on Sam Haggerty’s RBI single in the top of the sixth to get within 5-4.

Rengifo’s three-run homer in the bottom of the sixth, hitting left-handed against Matthew Festa, gave the Angels a seemingly comfortable 8-4 lead. The Mariners responded again, though, cutting the gap to 8-6 on France’s two-run homer in the seventh.

After Santana went deep with one out in the ninth, Tepera struck out Jesse Winker and got J.P. Crawford line out to right field, ending the game.