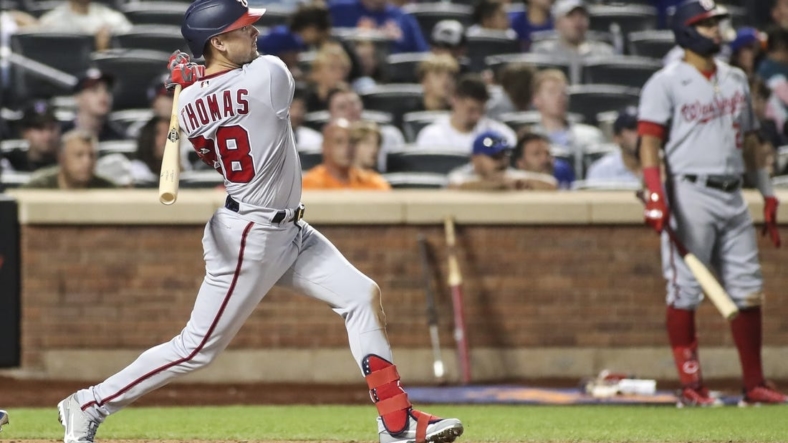 Luis Garcia had four hits, including a home run, and Lane Thomas homered as part of his three-hit night to lead the Washington Nationals to a 7-1 win over the host New York Mets on Saturday.

Thomas, who went 3-for-4 with a walk and two RBIs, drilled Adam Ottavino’s slider over the left field fence to break a 1-1 tie in the eighth inning before adding a run-scoring single in the ninth. Garcia went 4-for-5 with a walk and an RBI to lift the Nationals their third win in the past four games.

Patrick Corbin, who leads the majors in losses, had one of his best outings of the season. The left-hander (6-17) allowed just a run on three hits with five strikeouts and a walk in five innings before being relieved by Carl Edwards Jr. in the bottom of the eighth.

Edwards Jr. worked around a walk to Eduardo Escobar and a two-out infield single by Starling Marte before getting Francisco Lindor to pop out to shortstop to end the inning. Erasmo Ramirez pitched a scoreless ninth.

The Nationals extended the lead to 7-1 in the ninth on a run-scoring single by Josh Palacios, a two-run single by CJ Abrams, an error on second baseman Jeff McNeil on a failed pickoff attempt and Thomas’ single.

After Garcia’s solo home run gave the Nationals a 1-0 lead in the first inning, the Mets pulled even in the third on a solo homer by Escobar.

Mets starter Max Scherzer didn’t factor in the decision after allowing a run on three hits with five strikeouts and a walk in five innings before being relieved by Tommy Hunter.

Scherzer was seeking to join Justin Verlander (242 wins) and Zack Greinke (223) as the lone active pitchers with at least 200 victories.

Hunter pitched a scoreless sixth before Joely Rodriguez silenced the Nationals in the seventh.

However, Ottavino (5-3) gave up Thomas’ blast that gave the Nationals a lead they wouldn’t relinquish.

Palacios and Abrams each had two hits for Washington, while Marte had two of the Mets’ four hits.