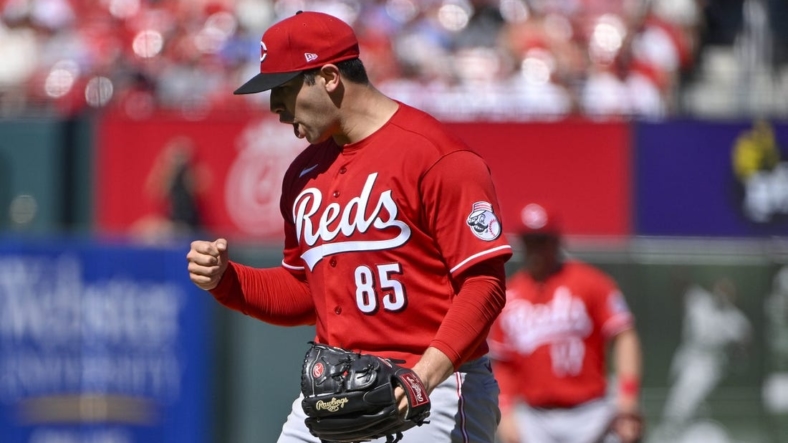 Luis Cessa and three relievers combined on a two-hitter as the visiting Cincinnati Reds recorded a 3-0 win over the St. Louis Cardinals on Sunday.

Stuart Fairchild belted a two-run homer for the Reds (58-89), who snapped a three-game losing streak and won for just the second time in 11 games.

The Cardinals (87-61) lost for just the third time in nine games.

Cessa (4-3) blanked the Cardinals for five innings on one hit and two walks. Relievers Derek Law allowed one hit over 1 2/3 innings before Joel Kuhnel and Buck Farmer took it the rest of the way.

The Reds took a 1-0 lead in the third inning. Jose Barrero hit a one-out single and Jonathan India drew a two-out walk before Spencer Steer’s RBI single opened the scoring.

In the bottom of the inning, Nolan Gorman drew a one-out walk, Paul DeJong hit a single and Brendan Donovan reached on an error to load the bases. But Cessa escaped after inducing a double-play grounder from Corey Dickerson.

Chuckie Robinson hit a one-out double off the center field wall in the fifth inning. India walked again, then Montgomery struck out Steer and Kyle Farmer to end the threat.

But Cincinnati increased its lead to 3-0 in the sixth inning. Nick Senzel hit a single and Fairchild launched his two-run homer to end Montgomery’s day.

With two outs in the seventh inning, Lars Nootbaar walked and Yadier Molina hit a single. Kuhnel relieved Law and struck out Gorman to keep the Cardinals off the board.

Matt Reynolds and Barrero started the ninth inning with singles off Cardinals reliever Packy Naughton. Robinson bunted the runners over, but Chris Stratton relieved Naughton and retired India on a flyout to center field.

Nootbaar threw out Reynolds trying to score on the play.