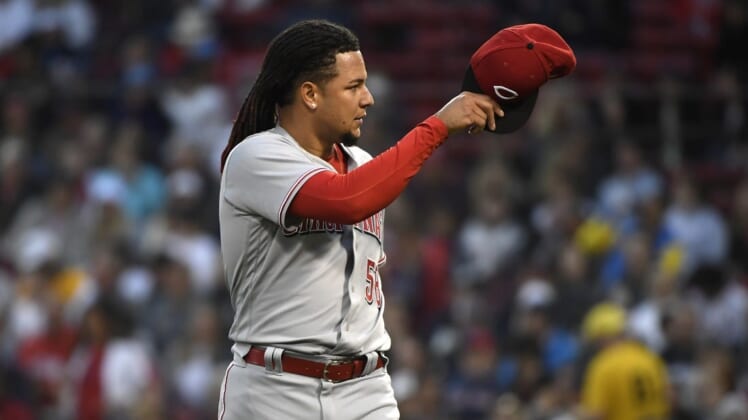 Two-out errors in the sixth and ninth innings allowed runs to score as the Cincinnati Reds edged the host Boston Red Sox, 2-1, in the first of a two-game series on Tuesday night.

Joey Votto doubled twice in three at-bats, Matt Reynolds went 3-for-4 with a run and Albert Almora Jr. went 2-for-4 to lead the Reds, who have won five of their last six.

In just his fifth start of the season, Luis Castillo (2-2) struck out 10 and allowed just one hit and three walks across six shutout innings.

With two outs in the bottom of the ninth, Alex Verdugo’s ground-ball single off Votto’s glove allowed Boston to cut its deficit in half. Enrique Hernandez singled up the middle and Rafael Devers (2-for-4) doubled into the left-field corner to start the frame.

Tony Santillan secured his fourth save by striking out Trevor Story with Devers on third as the tying run.

A Rafael Devers single in Boston’s second at-bat marked the lone baserunner for either team through 3 1/2 innings.

In Boston’s fourth, J.D. Martinez was stranded on second base after a walk and a passed ball.

Jackie Bradley Jr. and Hernandez began the sixth by drawing back-to-back walks, but Devers grounded into a double play and Castillo struck out Martinez swinging to keep Boston scoreless after six.

Boston starter Michael Wacha (3-1) began the game with four consecutive 1-2-3 innings before Votto began the fifth with the Reds’ first hit of the game — a double off the top of the Red Sox bullpen wall that was inches from a home run.

The Reds broke the scoreless tie in the sixth. Almora and Reynolds began the frame with back-to-back singles. Almora was then cut down at the plate on Aristides Aquino’s fielder’s choice grounder to third, but a two-out throwing error by Devers allowed the first run to cross home.

Another error allowed the visitors to double their lead in the ninth. Alejo Lopez made it a 2-0 Reds lead after crossing the plate on a Reynolds single and subsequent throwing miscue by Xander Bogaerts.