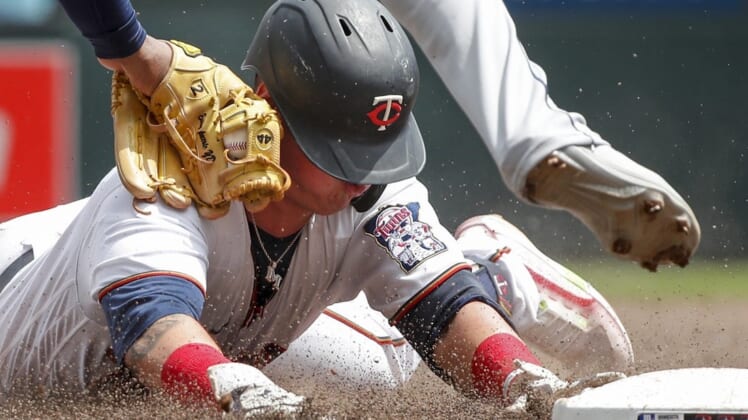 Luis Arraez hit a grand slam and had three hits and Jorge Polanco reached base three times and drove in what proved to be the winning run as the Minnesota Twins rallied from an early 3-0 deficit to defeat the Tampa Bay Rays, 6-5, on Saturday afternoon in Minneapolis.

It was the 12th multi-hit contest in the last 20 games for Arraez, who leads the majors with a .367 average. Polanco, Gilberto Celestino and Max Kepler each added two hits while Ryan Jeffers scored twice as the Twins won for the fourth time in five games against Tampa Bay. Trevor Megill (2-1) picked up the win in relief while Emilio Pagan pitched a 1-2-3 ninth to garner his eighth save.

Yandy Diaz went 2-for-4 with two RBIs and Kevin Kiermaier, Manuel Margot and Randy Arozarena each had two hits and a run scored for Tampa Bay. Shane Baz (0-1), the Rays’ No. 1 rated prospect who was making his 2022 debut following arthroscopic right elbow surgery in March, retired the first six batters he faced but departed after six straight batters reached base to start the third inning, including Arraez’s grand slam.

Tampa Bay parlayed five singles and an error into a 3-0 lead in the first. Ji-Man Choi had an RBI single to make it 1-0 and Diaz followed with a two-run single.

The Twins then sent 10 men to the plate while taking a 5-3 lead in the bottom of the third. Celestino led off with a single and Nick Gordon and Jeffers followed with walks to load the bases. Arraez then drilled a 2-0 Baz fastball 403-feet into the plaza behind the right field bleachers for his third homer of the season and first career grand slam. Polanco then walked and scored on a double off the fence in left-center by Jose Miranda.

The Rays made it to 5-4 in the sixth when Taylor Walls hit a two-out double into the left field corner off reliever Caleb Thielbar and scored on a pinch-hit single by Harold Ramirez.

The Twins extended their lead to 6-4 in the bottom half of the inning on an RBI single by Polanco, driving in Jeffers who had reached on a fielder’s choice and advanced to third on a single by Arraez.

Tampa Bay cut it to 6-5 in the seventh when Kiermaier doubled into the left field corner and scored on a throwing error by Gordon on a Margot grounder.