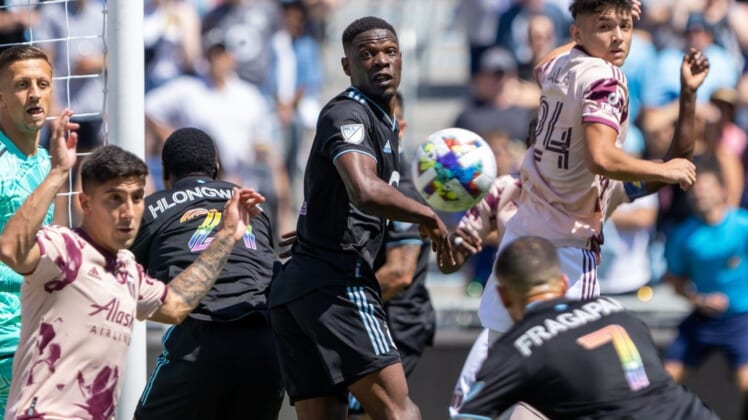 Luis Amarilla collected two goals and an assist as host Minnesota United extended their unbeaten streak to seven matches with a wild 4-4 draw against the Portland Timbers on Saturday afternoon in Saint Paul, Minn.

Franco Fragapane added a goal and an assist and Bongokuhle Hlongwane scored for the second straight game for the Loons (10-8-5, 35 points). Dayne St. Clair finished with four saves as Minnesota improved to 5-0-2 in its last seven matches.

Portland’s Sebastian Blanco highlighted his brace by scoring 13 seconds into the match for the fourth fastest in MLS history. Jaroslaw Niezgoda added a goal and an assist and Aljaz Ivacic made two saves for the Timbers (7-6-10, 31 points), who extended their unbeaten streak to eight games (4-0-4).

The Timbers, who eliminated Minnesota in the opening round of the MLS Cup playoffs with a 3-1 victory in November, took a 1-0 lead on Blanco’s fourth goal of the season right off the opening kickoff. The score came after seven passes that sliced through the Minnesota defense, ending with Blanco firing a left-footed shot from the center of the box off a short Niezgoda pass inside the right post.

But the host Loons responded with three goals over a 22-minute span to take a 3-1 halftime lead. Fragapane tied it in the ninth minute with his fourth goal of the season. The score came on a Emanuel Reynoso corner that glanced off Amarilla’s head near the front post to Fragapane at the back post.

Hlongwane made it 2-1 in the 21st minute when he drilled in a right-footed rebound after a Fragapane shot caromed off the left post.

Amarilla increased the Loons’ lead to 3-1 in the 41st minute with his sixth goal of the season. He broke down the left wing and then cut inside in the box and fired a right-footed shot inside the right post.

But Portland rebounded to take a 4-3 lead with three goals over a 15-minute span early in the second half. Blanco got the first with a one-touch right-footed shot from the middle of the box past a diving St. Clair off a Santiago Moreno pass. Niezgoda tied it three minutes later when he flicked in a Claudio Bravo free kick.

The Timbers then went ahead in the 65th minute when Blanco’s sharp-angle shot from the right side of the box deflected off the foot of Minnesota defender Kemar Lawrence past St. Clair for an own goal.

The Loons then tied it at 4-4 in the 69th minute on Amarilla’s header inside the left post from middle of the six-yard box.