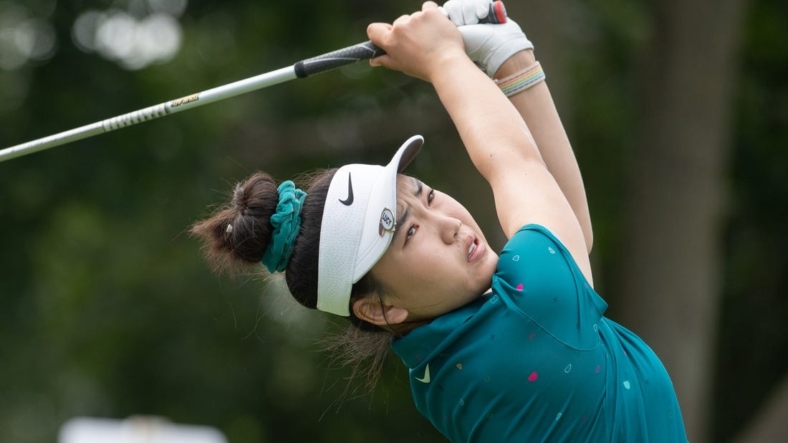 It’s been a long time coming, and Lucy Li appears to be arriving at her prime even before her rookie year on the LPGA tour.

Li carded five birdies in a seven-hold stretch on the back nine Friday to take a one-stroke lead in the Dana Open at Highland Meadows in Sylvania, Ohio.

Carlota Ciganda of Spain is just one stroke behind after a 68 Friday, and Chinese rookie Ruoning Yin is two back after a 69. Ciganda and Yin shared the first-round lead with Hye-Jin Choi of South Korea, who is now tied for fourth with four others at 7 under heading into the weekend.

Hannah Green of Australia had the round of the day, carding nine birdies without a bogey for a 62. She sits four strokes behind Li, tied for ninth place with seven other golfers.

Back in 2014, Li became the youngest player ever at the U.S. Women’s Open when she qualified at age 11. The Californian has won twice this year on the Epson Tour to earn one of the developmental circuit’s 10 LPGA cards for 2023.

“I was hitting it really good today,” Li said. “Also yesterday. I just got a few more putts to drop today. Made a few good par saves on my back nine, so that really kept the momentum going.”

Li received an exemption to play in the CP Women’s Open last week, when she finished tied for ninth to earn a spot in the Dana Open.

“It was such a quick turnaround for me,” she said. “I just played one practice round. I just wanted to play the best that I can.”

She said she hadn’t anticipated playing in the successive tour events.

“I was looking forward to going home this week actually,” Li said, “but it’s nice to be out here playing on the LPGA. I’m just trying to have a good time.”

It’s the first time Li has led an LPGA event.

“It’s a new experience,” she said, “but definitely having those two wins on the Epson Tour gives me confidence in knowing I can play well coming down the stretch. I think it’s really important to treat every day the same, no matter what position you’re in.”