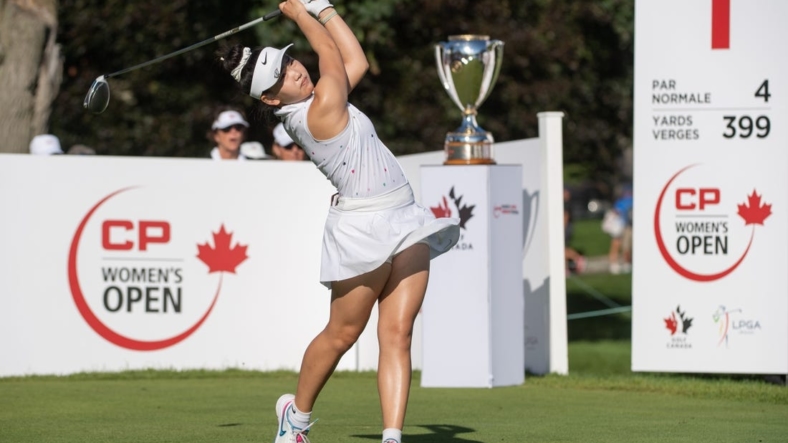 Six birdies more than made up for a pair of bogeys for Lucy Li on Saturday as she maintained a one-stroke lead in the Dana Open at Highland Meadows in Sylvania, Ohio.

Li carded a four-under 67 and sits at 14-under 199 going into the final round Sunday. She bogeyed on the par-four No. 1 and the par-five No. 7 before settling in to put together a string of six birdies over 10 holes.

The 19-year-old Li, who became the youngest player ever at the U.S. Women’s Open when she qualified at age 11 back in 2014, still hasn’t officially begun her rookie year on the LPGA tour — that starts in 2023, though she’ll have the option to become a rookie this year with a championship Sunday.

“It’s been a kind of a whirlwind couple of months. Definitely didn’t expect to be here a couple months ago, so I’m just really grateful to be here and have this opportunity,” Li said . “Whatever happens tomorrow will happen.”

Lexi Thompson and Germany’s Caroline Masson are tied for second one shot behind Li at 13 under after both players shot matching 65s on Saturday.

Masson’s round included six birdies, including three straight over Nos. 16-18. She had no bogeys.

Thompson endured some downs, including a bogey on No. 5, but she also scored an exhilarating eagle on the par-4, No. 9.

She would earn the 12th victory of her career and her first since the 2019 ShopRite LPGA Classic with a win Sunday.

The best round of the day belonged to New Zealand’s Lydia Ko, who fired a seven-under 64 to forge a tie for fourth with six other golfers at 11 under.

Ko’s day included an eagle on 12, and that gave her momentum for the rest of the round.

“I think after the eagle I was able to birdie the next couple holes and then take advantage of the 17th and 18th being par-5s,” Ko said. “Made a couple good birdies on my back nine, which was the front nine, as well. I think overall I didn’t put myself in too many crazy positions and I was playing steadily. I think that’s what you got to do around this golf course, and just keep knocking on the door and just hope for a few putts to drop.”

“There is plenty of golf left,” Lopez said. “There is so many birdie opportunities out there that you never know who’s going to have a hot streak at the end of the day.”