Lucas Raymond breaks out as Red Wings hold off Wild 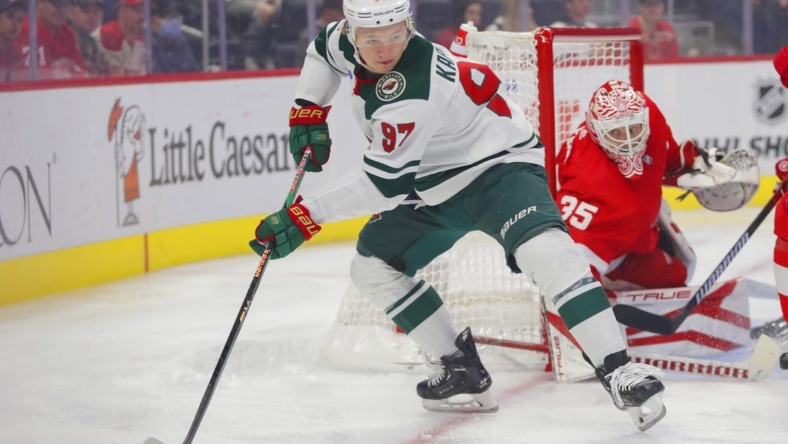 Lucas Raymond scored his first two goals of the season and the host Detroit Red Wings downed the Minnesota Wild 2-1 on Saturday night.

Raymond was one of the league’s top rookies last season, when he collected 23 goals and 57 points. He was mired in a scoring slump in the early going this season but broke through with the aid of Dylan Larkin, who assisted on both goals.

Ville Husso stopped 30 shots for Detroit, which lost in regulation in its last two games.

The Wings were credited with 35 hits, 10 more than the Wild.

Minnesota was limited to Kirill Kaprizov’s sixth goal this season. The Wild were playing their fourth game during a five-game road trip and had notched five of a possible six points prior to Saturday’s outing.

There were only three power plays during the crisply played contest. Minnesota came up empty in its lone man-advantage situation, while Detroit went 1-for-2.

Kaprizov put the Wild on top just 1:28 into the game. He scored on a 2-on-1 situation, lifting a shot about Husso’s right shoulder. Mats Zuccarello’s center ice pass set up the goal and Frederick Gaudreau had the second assist.

Larkin nearly knotted the score when one of his shots clanged off the post. He soon collected an assist when Raymond ended his scoring drought. Raymond ripped a shot from the right circle that beat Gustavsson on the stick side. Adam Erne had the other assist.

Raymond’s second goal came on a power play off a Dominik Kubalik feed with 4.5 seconds left in the period. The puck trickled through Gustavsson’s pads on Raymond’s close-range shot, giving Detroit a 2-1 edge.

The Red Wings had the man advantage after Matt Dumba was called for high sticking against Elmer Soderblom. Larkin had the second assist.

Detroit withstood the Wild’s late flurry in the third after Gustavsson was pulled with two minutes left for an extra skater.