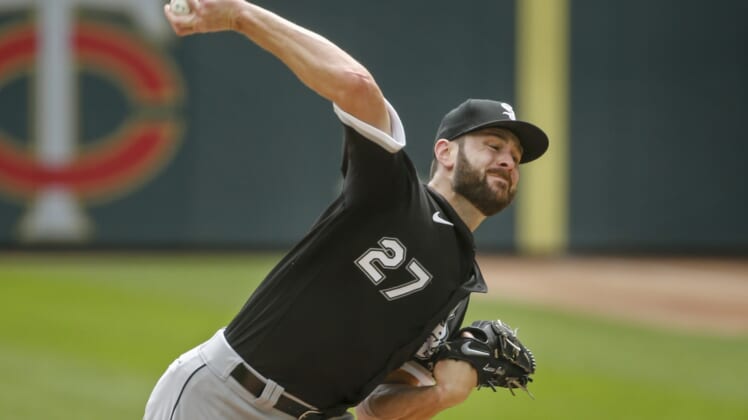 Lucas Giolito allowed two hits, struck out 11 and gave up one run over eight innings to lead the Chicago White Sox to a 2-1 victory over the Minnesota Twins in the rubber game of their three-game series on Wednesday afternoon in Minneapolis.

Giolito (3-4), who was 1-4 with a 6.75 ERA in his five previous starts, kept the Twins off-balance all afternoon with a changeup and left after throwing 111 pitches, 68 for strikes. He walked three.

Liam Hendricks picked up his ninth save with a 1-2-3 ninth, striking out two of the three batters he faced.

Leury Garcia went 2-for-4 with an RBI and a run scored for the American League Central-leading White Sox, who improved to 5-1 this season against the Twins and completed a 13-game stretch against Minnesota and Kansas City with a 10-3 mark.

Nelson Cruz had both hits for Minnesota, including the 427th home run of his career to pass Billy Williams and move into a tie for 50th place on the all-time home runs list with Mike Piazza. Cal Ripken Jr. is 49th with 431.

Matt Shoemaker (2-5) suffered the loss. He allowed two runs on five hits and four walks over six innings and struck out two.

Cruz gave Minnesota a 1-0 lead in the third inning when he lined his 10th homer of the season over the 403-foot sign in right-center. The 416-foot drive was the fourth of Cruz’s career against Giolito, the most by any right-handed batter in the league.

Chicago tied it in the fifth when Garcia led off with a line-drive double into the gap in right-center and was sacrificed to third by Danny Mendick. After Tim Anderson, who went 0-for-5 for the second straight game, grounded out, Adam Eaton drove in Garcia with an infield single deep into the hole at short.

The White Sox then took a 2-1 lead in the sixth when Jake Lamb led off with a double to right-center, advanced to third on a groundout and scored on Garcia’s single that one-hopped the fence down the left field line.