LSU’s K’Lavon Chaisson: Sam Ehlinger not ‘too much of a threat’ 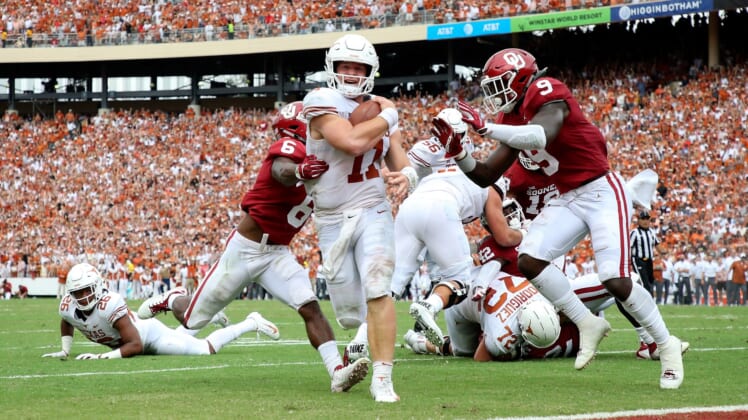 LSU linebacker K’Lavon Chaisson is wasting no time getting in a subtle dig at Sam Ehlinger ahead of his Week 2 game against the Texas Longhorns.

Chaisson, who played against Ehlinger in Texas’ 6A State Title game back in 2015, was asked about facing him again. He responded by taking a shot at the quarterback, then saying he wasn’t taking a shot at him.

“I don’t find him too much of a threat,” Chaisson said, per Brian Holland NBC 33 in Baton Rouge,” that’s not a shot at him…he uses his legs more than his arms.”

He continued, saying, “he has a decent arm on him, but it’s more about his legs.”

Tell that to poor old Louisiana Tech, which got scorched through the air by Ehlinger Saturday. The Longhorns quarterback passed for 276 yards and four touchdowns as Texas rolled, 45-14.

Granted, LSU’s defense will put Ehlinger’s arm to the test quite a bit more. The game should be a great barometer for the quarterback, and should tell us if Texas really is “back” this year.