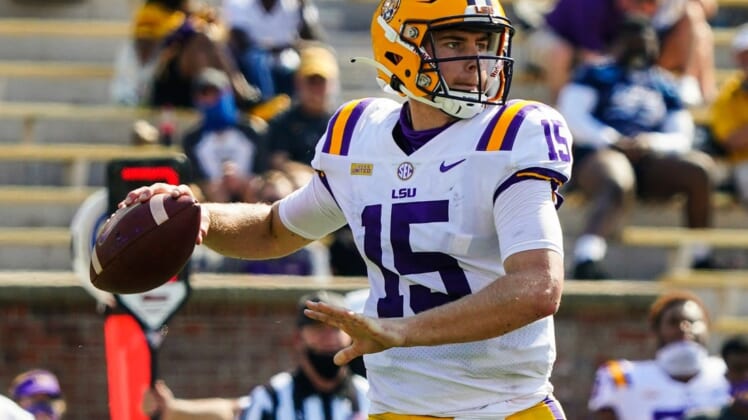 LSU quarterback Myles Brennan is walking away from football after reportedly being informed he would not be the starting quarterback this season.

Brennan lost out in a three-way competition with Arizona State transfer Jayden Daniels and Garrett Nussmeier.

WWL Radio Sports is reporting that Daniels will be named the starter and Nussmeier the backup. Nussmeier is recovering from a minor ankle injury. LSU also has five-star freshman Walker Howard on the depth chart.

LSU announced Monday that Brennan has opted to end his collegiate career after five injury-riddled years.

“Myles has always embodied the traits required to fulfill our mission to graduate champions, and we have full confidence those traits will help him succeed at every step in his journey as he moves forward,” LSU head coach Brian Kelly said in a statement.

Thank you, Myles, for everything you did for LSU. pic.twitter.com/Yc40T1liPc

Brennan entered the transfer portal in November but then withdrew to return to the Tigers.

Brennan has been beset by injuries since starting the first three games of the 2020 season. He sustained a torn abdominal muscle that ended that season, then broke his non-throwing arm last summer that required surgery, ending his 2021 season before it began.

Brennan backed up Heisman Trophy winner Joe Burrow during the 2019 national championship season and has 1,712 career passing yards with 13 touchdowns against six interceptions with the Tigers.

Daniels, a graduate transfer, brings a wealth of experience to LSU, throwing for 6,025 and 32 touchdowns in three seasons for the Sun Devils. He also rushed for 1,288 yards and 13 more scores.

In his first season at LSU in 2021, Nussmeier appeared in four games and was 29-of-57 passing for 329 yards with two touchdowns and two interceptions.