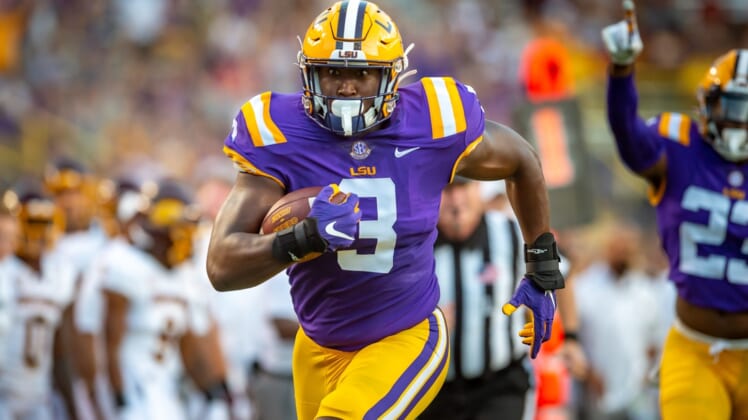 Mississippi State shocked LSU 44-34 in the season opener for both teams last season, as the Bulldogs passed for an SEC-record 623 yards in upsetting the defending College Football Playoff champions.

Orgeron vowed that his defense will do better when host Mississippi St. (2-1) and LSU (2-1) meet in their SEC opener Saturday in Starkville, Miss.

“We’ve been looking at Mississippi State ever since we couldn’t stop them last year,” Orgeron said. “We know how good they are. We weren’t expected to get burnt last year, but hopefully we fixed that.”

The Tigers, ranked 16th entering this season, had similar defensive lapses in a 38-27 opening loss at UCLA.

They bounced back with two easy home wins against less-talented opponents in FCS McNeese State (34-7) and Central Michigan (49-21).

“I believe we have solved a lot of our problems, but we didn’t answer the first challenge against UCLA,” Orgeron said. “We’ve gotten better, but we’re going to be challenged this Saturday.”

Max Johnson threw five touchdown passes against CMU after throwing three in each of his previous four career starts.

The Bulldogs overcame a 20-point deficit to beat Louisiana Tech 35-34 in their opener, then were impressive in a 24-10 victory against N.C. State. But last week they lost at Memphis 31-29 after failing on a two-point conversion with 1:32 left.

“We’ve just got to be a consistent team, and right now, we are not,” Mississippi State coach Mike Leach said. “Tough teams have the discipline to just focus one play at a time. We focus in spurts. We need to focus on how good we can be if we fully invest in focusing one play at a time.”

K.J. Costello had the record day against LSU in 2020, but Will Rogers is the quarterback now. He completed a school-record and SEC-record 50 passes and had 419 passing yards against Memphis.

The Bulldogs, who have just a 25.5 percent third-down conversion rate on defense, are allowing just 74.0 rushing yards per game and LSU is averaging just 86 rushing yards.