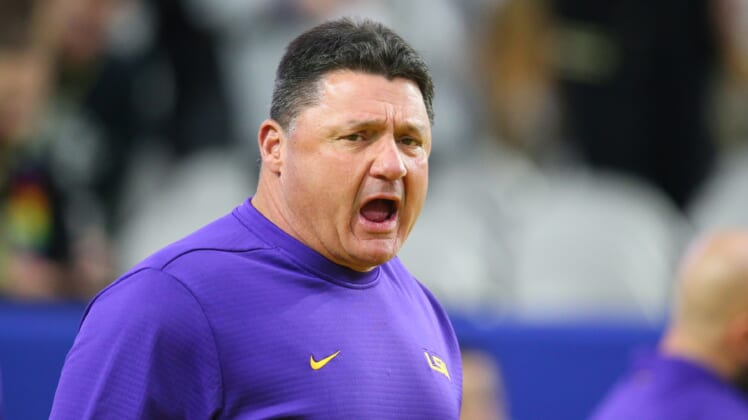 The LSU Tigers (No. 1 in the nation) pasted SEC foe Arkansas, 56-20 on Saturday, but they weren’t in a celebratory mood afterward. LSU coach Ed Orgeron was asked why the Tigers didn’t celebrate.

His response was both savage and legendary: “There wasn’t going to be celebration for beating Arkansas, they haven’t beaten anyone in a long time,” Orgeron said, per Brody Miller of The Athletic.

As the kids say, though, no lies detected.

The Razorbacks haven’t won an SEC game since the 2017 season. The program just recently paid over $17 million in a buyout of Chad Morris, who was hired ahead of the 2018 season after Bret Bielema was let go with a pile of cash.

Meanwhile, LSU is looking like a shoo-in to get into the College Football Playoff with Heisman favorite Joe Burrow wowing on a weekly basis.

LSU clearly has bigger goals in mind than taking down Arkansas.