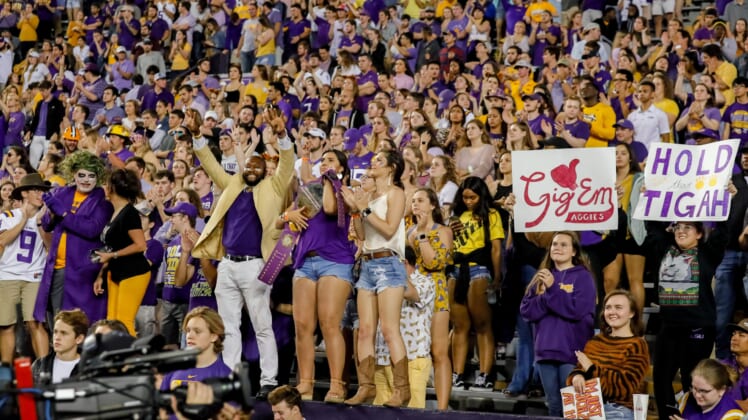 As teams begin to prepare for the 2020 college football season, athletic directors around the NCAA are making plans for how to get fans into seats this year during the COVID-19 pandemic.

Stadium revenue from the college football season is essential for many universities across the country. It became clearer how badly schools want fans in attendance following a wild comparison by Louisiana State’s athletic director Scott Woodward.

LSU AD: Risk of fans in stadiums is like car accidents

During a town hall with The Advocate, Woodward opened up about the difficulties the COVID-19 pandemic has caused for the NCAA, how it will influence a potential college football season and what it all means for fans.

While he admitted there won’t be a clear outlook on what the upcoming season will look like until July, Woodward also compared the risk of attending games to car accidents.

Woodward, who became LSU’s athletic director in 2019, is focusing on the risk people take each time they decide to get in a car. Accidents happen every day and there is always a chance for a person to be involved in a car crash.

However, the odds of a person being involved in a car accident, per Cars.com, is 1-in-77 and the odds of dying in a motor vehicle crash is 1-in-114, per the National Safety Council.

Of course, while there are multi-vehicle accidents and multiple people can ride in a car, the chances of the coronavirus spreading at a stadium could impact a far wider population.

Many universities are dependent on the revenue generated from ticket sales and money generated from game-day operations. We’ve seen the ramifications of sports being suspended with the likes of Furman University, Bowling Green and the University of Akron eliminating sports programs.

While hundreds of schools might be forced to make tough decisions this summer due to the financial crisis, LSU isn’t one of them.

Coming off a national title and with the program’s future looking promising, the Tigers are in great position to keep producing.

Despite having a great financial standing, LSU seems ready to take the risk of bringing fans into Tiger Stadium. Of course, they might mitigate that risk by requiring fans to sign a waiver before attending football games this fall.