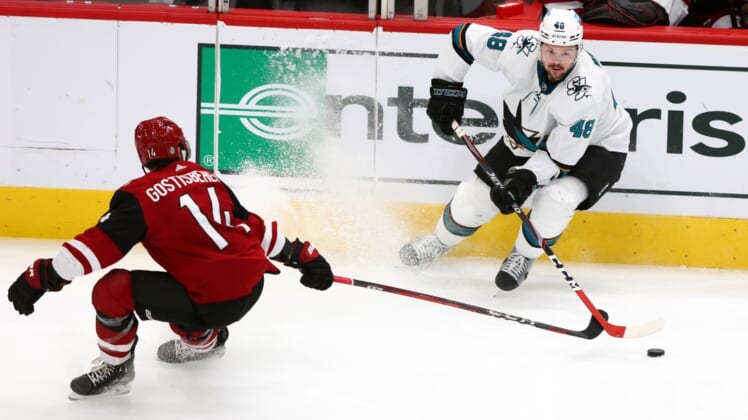 Jan Jenik scored two goals and Karel Vejmelka had 40 saves as the Arizona Coyotes ended a six-game losing streak with a 5-2 victory Wednesday over the visiting San Jose Sharks.

Nick Ritchie scored a first-period goal for Arizona, while Barrett Hayton and Nick Schmaltz each scored in the final 2:58 to seal the victory. Despite the victory, the Coyotes’ 47 points are tied with the Montreal Canadiens for worst in the NHL.

The victory was bittersweet after Coyotes forward Clayton Keller left on a stretcher with 5:15 remaining. Keller, who leads Arizona in goals (28), assists (35) and points (63), lost his balance and crashed into the end boards with his right leg taking the brunt of the impact.

Scott Reedy and Brent Burns scored goals for the Sharks, while James Reimer had 19 saves. San Jose’s slim playoff hopes were dealt a blow with the defeat.

Jenik’s second goal of the game came at 7:11 of the third period to give Arizona the lead for good when he pounced on a loose puck in front of the San Jose goal and scored past Reimer. It was his second goal of the season and fourth of his career in seven games, with all four coming against San Jose over the past two seasons.

Reedy gave San Jose a 1-0 lead on the power play 12:15 into the game when he tipped the puck past Vejmelka after a Ryan Merkley shot from near the blue line. It was Reedy’s second of the season.

Ritchie tied the score 15:46 into the game for Arizona when he deflected a Schmaltz pass from the edge of the crease for his 10th of the season.

The Coyotes took a 2-1 lead at 8:33 of the second period after Phil Kessel fired a quick pass from behind the goal and Jenik scored from the slot.

The Sharks got even at 2-all with just under six minutes remaining in the second period when Burns scored from the right point for his seventh of the season. Timo Meier had an assist on the play to give him eight points (five goals, three assists) in his past five games.