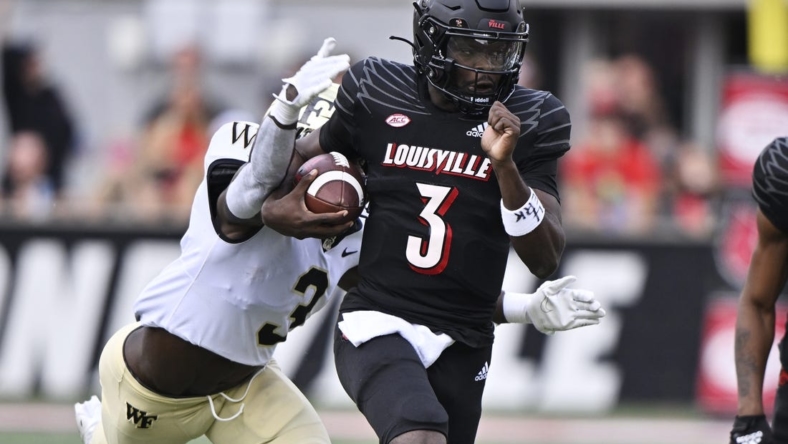 Kei’Trel Clark and Quincy Riley returned interceptions for touchdowns, with Clark’s effort a 46-yarder and Riley making it 90 yards on his return on the last play of the third quarter.

Wake Forest quarterback Sam Hartman threw three interceptions, with two of those returned for touchdowns. He completed 20 of 35 throws for 271 yards and a touchdown.

Cunningham was 15-for-23 for 164 yards in the air and he gained another 38 yards on nine carries on the ground.

Riley had two of Louisville’s four interceptions, helping the Cardinals to a three-game winning streak.

Despite scoring so many points on defense and having short fields following Wake Forest turnovers, the Cardinals held a 411-402 advantage in total offense.

The Demon Deacons’ only previous loss this season came in overtime to undefeated Clemson.

Wake Forest wiped out a 13-0 hole in the second quarter, with Justice Ellison scoring on a 3-yard run and Hartman connecting with Jahmal Banks on a 16-yard touchdown play.

Cunningham ran in from 1 yard out in the first minute of the second quarter.

Backup quarterback Mitch Griffis of Wake Forest threw a touchdown pass for the only touchdown for either team in the fourth quarter.