Louisville falls to 0-3 after upset by Appalachian State 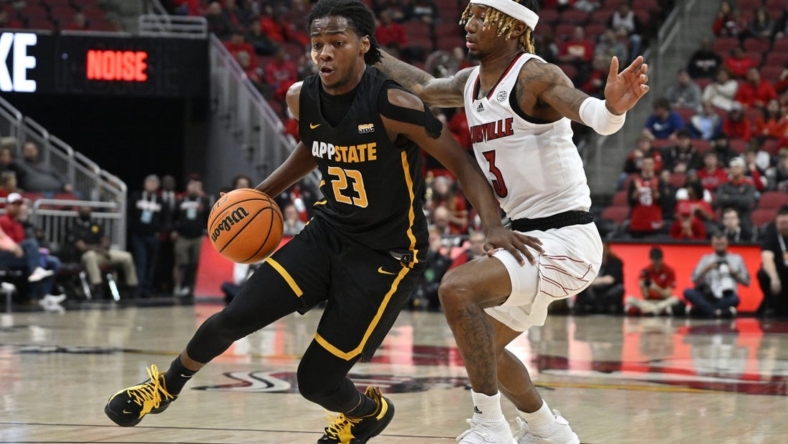 Donovan Gregory scored 16 points and Tyree Boykin added 14 as Appalachian State held on to stun host Louisville 61-60 Tuesday night, dropping the Cardinals to 0-3 for the first time in 36 years.

Louisville (0-3) fell behind early in losing its third straight game to start the season, all by one point — marking the first time school history that the Cardinals have dropped four consecutive games by a single point (including last season’s 51-50 loss to Virginia in the ACC tournament).

Louisville went on numerous second-half spurts to cut a lead that was once 16 points in the first half down to one twice in the final 64 seconds. The Cardinals were led by guard El Ellis, who tallied a game-high 29 points. Brandon Huntley-Hatfield added 12 points, but the rest of the Cardinals totaled only 19 points.

After Appalachian State’s Boykin missed a 1-and-1 free throw with 10 seconds left, Ellis drove to the basket for what seemed to be the game-winning hoop. Ellis, however, did not get the shot off until after the final buzzer sounded.

Appalachian State took control in the first half behind 10 points apiece from Gregory and Boykin. The Mountaineers held Louisville to 26 percent shooting and six made field goals, while converting at a 48.4 percent clip of their own. Appalachian State forced 11 Louisville turnovers before the intermission.

Head coach Dustin Kerns is in his fourth season at Appalachian State and has led the Mountaineers to a handful of bright moments. Appalachian State won its first game over a Power 5 opponent for the first time since 2014 over Virginia Tech.

The Mountaineers jumped on top 5-0 early and never trailed.

Louisville, despite its second-half run, was unable to gain control with a poor shooting percentage and foul trouble by forward Jae’Lyn Withers, who fouled out in just 10 minutes of action.