Louis Oosthuizen doubled his lead after the second round of The Open Championship on Friday and in the process became the consensus favorite to claim his second Claret Jug.

Oosthuizen held a one-shot lead after an opening-round 64 on Thursday, but remained the second betting favorite behind Jordan Spieth (65) at most sportsbooks.

That changed after Oosthuizen shot a 5-under 65 on Friday to build a two-shot lead entering the weekend.

Offered at +450 by BetMGM, BetRivers and DraftKings entering the second round, the South African is now +250, +200 and +220 at the three sportsbooks, respectively.

Oosthuizen’s odds would have been even shorter if not for a bogey on the par-3 16th hole that dropped him from 12 under for the tournament. He hit a clutch par putt on the following hole and holds a two-shot lead over third-round playing partner Collin Morikawa, the 2020 PGA champion playing in his first Open Championship. 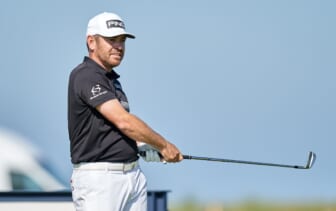 World No. 1 Dustin Johnson birdied the 18th hole Friday to polish off a 5-under 65 that vaulted him into a tie for fourth with Dylan Frittelli and Scottie Scheffler at 7 under. Johnson tied for second at Royal St. George’s in 2011 after infamously hitting a ball out of bounds while trying to catch eventual champion Darren Clarke.

At 64, Morikawa tied for the low round of the day on Friday with Emiliano Grillo (6 under for the tournament) and Jon Rahm (5 under). Rahm, seeking to become the first player to win the U.S. Open and The Open in the same year since Tiger Woods in 2000, enters the weekend tied for 12th.

The heavy pre-tournament favorite, the Spaniard finds himself six shots off the lead but firmly in the hunt. Rahm is being offered at +1100 by BetRivers, +1200 by DraftKings and +1400 by BetMGM.

Twenty-three golfers enter the weekend within seven shots of Oosthuizen, who has finished second in six majors since claiming the Open Championship in 2010. That includes each of the past two majors in 2021.

“The game is good, but I know it’s a really good leaderboard,” Oosthuizen said. “I have to play good golf this weekend if I want to come out first.” 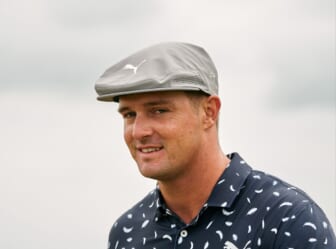 Among his pursuers is four-time major champion Brooks Koepka (5 under), who overcame a double bogey on Friday with a flurry of eight birdies. He enters the third round at +1400 by DraftKings, +1800 by BetMGM and +2000 by BetRivers.

Several sportsbooks breathed a sigh of relief when Stewart Cink plummeted below the cutline with a 77 on Friday. PointsBet reported that Cink was among the book’s biggest liabilities entering the tournament, and he was only two shots off the pace following an opening 66.