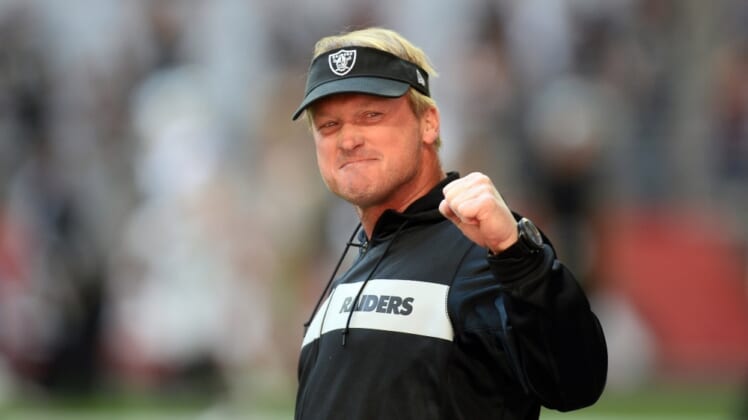 Jon Gruden’s Raiders are on the right track as the move to Las Vegas but still have lots of holes to fill. Photo: Joe Camporeale-USA TODAY Sports

It’s early, but for Oakland their Week 4 matchup in Indy is a must-win game for the young team.

It’s rare that fanbases push the panic button in the first quarter of an NFL season, but the Oakland Raiders difficult schedule would certainly have their supporters thinking about draft placement rather than the playoffs with a loss to the Indianapolis Colts on Sunday.

Coming off two blowout losses to the Kansas City Chiefs and Minnesota Vikings, the Silver and Black travel to Indianapolis for a crucial road game against an injury-riddled Colts squad.

If the Raiders cannot beat the Colts without three of their key playmakers, when will Oakland see another win? Take a look at the next three games on the schedule:

The Raiders would stare 1-6 in the face following another defeat Sunday. In that scenario, the coaching staff must focus on development, which signals the end of hope for a playoff push.

In the second half of the season, Oakland still has to go on the road to Kansas City and probably play a Los Angeles Chargers club at full strength. Running back Melvin Gordon ended his contract holdout. Safety Derwin James (injured reserve – foot) and left tackle Russell Okung (NFI list – blood clot) may suit up by Week 10.

The Raiders’ schedule doesn’t allow for many “breaks” with bottom-tier teams, so they have to take advantage of a short-handed opponent in the upcoming matchup.

At 1-2, the Raiders cannot start to feel sorry for themselves nor should fans dip their hands in the cabinet for a list of excuses why this club cannot win on Sundays.

Yes, we know wideout Antonio Brown forced his way out of Oakland. His absence takes the dynamic element out of the offense, but he was a reasonable gamble the team took knowing the concerns about his temperament. The Raiders rolled the dice on a high-risk, high-reward aspect and crapped out—that’s the downside of taking a chance, you could lose.

The Raiders rolled the dice on a high-risk, high-reward aspect and crapped out—that’s the downside of taking a chance, you could lose.

Right guard Gabe Jackson suffered an MCL injury during a joint practice with the Los Angeles Rams in August. The coaching staff had more than enough time to compensate for his absence through coaching or a potential trade for a fringe starter at the position.

Furthermore, for every issue the Raiders dealt with early in the season, the Colts have comparable or bigger problems.

So, what’s the Raiders excuse? None.

Oakland needs an efficient game from quarterback Derek Carr, who has a pair of solid perimeter pass-catchers in Tyrell Williams and tight end Darren Waller.

According to the NBCS Bay Area’s Scott Bair, head coach Jon Gruden expects right tackle Trent Brown (ankle and knee) to suit up. Left guard Ritchie Incognito will start in his second game coming off suspension. Running back Josh Jacobs, healthy after fighting an illness last week, should be heavily involved in the game plan for a winning result.

Will the Defense Learn from Past Miscues?

Although the Colts won’t have multiple starters in the upcoming matchup, their offense can do two things to beat the Raiders.

Last year, in Week 8, Oakland allowed touchdowns to Ebron, Doyle, and Alie-Cox – but fans know covering tight ends has been an issue for the past several seasons.

Former general manager Reggie McKenzie and the current regime have refused to draft a quick-twitch athletic inside linebacker with reliable coverage ability.

Former general manager Reggie McKenzie and the current regime have refused to draft a quick-twitch athletic inside linebacker with reliable coverage ability.

Without Hilton, expect Brissett to exploit the Raiders defense with his tight ends. If Guenther doesn’t have a counter, the game could get out of hand very quickly. Perhaps we’ll see Daryl Worley take more snaps at safety.

In Week 3, Vikings running back Dalvin Cook left cleat marks on the Raiders defense, logging 110 rushing yards and a touchdown on 16 carries. The unit will attempt to slow down running back Marlon Mack, who’s third in yards on the ground (299).

Will we see the solid defensive front from Weeks 1 and 2 or the group that couldn’t stop Cook last week?

The Raiders can’t allow Mack and the tight ends to beat them Sunday. Whether it’s a close game or not, a 1-3 squad headed down a road with playoff contenders on the schedule won’t have many wins this season. When the losses pile up, it’s hard to shake off the “here we go again” feel once something goes wrong during games.

This is a must-win contest for the Raiders if they can want to be viewed as a competitive club this season.

In the bigger picture, Carr’s longevity with the franchise, Gruden’s play-calling, and Guenther’s defensive style will come into serious question if Oakland is blown out for a third consecutive game.

Are they the right people to steer this team in the right direction? They have to start showing some positive signs against a vulnerable opponent Sunday.

If not now, then when?