Losers of 2 straight, Lightning look to regroup vs. Oilers 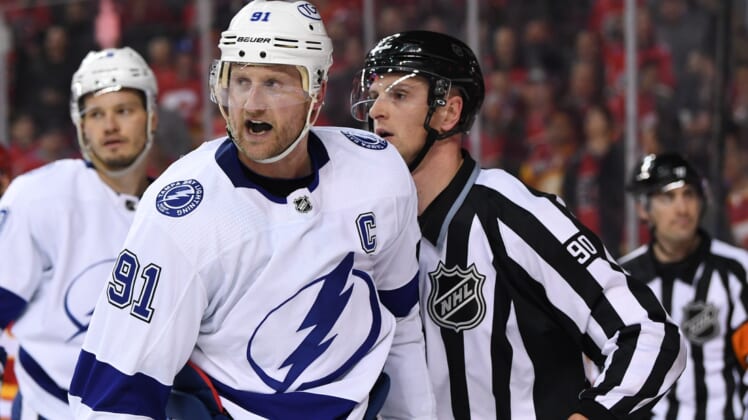 The Tampa Bay Lightning will try to put an end to a rare losing streak on Saturday night when they visit the Edmonton Oilers.

The two-time defending Stanley Cup champions, began a six-game road trip with a 6-3 win at Chicago on Sunday, but then lost 7-4 at Winnipeg on Tuesday and 4-1 to Pacific Division-leading Calgary on Thursday. That marked the first time in 57 games this season that the Lightning have lost back-to-back games in regulation.

Tampa Bay captain Steven Stamkos said there is no need to push the panic button despite his team having been outscored 11-5 in the two losses.

“Teams go through that stuff,” Stamkos said. “It’s 50-whatever games into the season, and this is the first time we’ve lost back-to-back games, right? So that’s pretty good. It’s going to happen. Teams go through tough stretches all the time. We’re going through a little bit of a bump now. We’ll correct it.”

Thursday’s game was tied 1-1 heading into the final minute of the second period when Calgary’s Johnny Gaudreau, who finished with a hat trick, and Mikael Backlund scored 52 seconds apart.

“You never want to give up a goal, let alone two, in the last minute of a period,” said Lightning forward and 17-year NHL veteran Corey Perry. “It’s just little mistakes here and there, and it’s costing us right now.”

“It was an even game for 39 minutes, and one team hurt themselves, and the other didn’t,” said Tampa Bay coach Jon Cooper.

“We’ve talked about a bunch of things in the room, starting in our own zone and moving forward from there,” Perry said. “It’s progress. It’s baby steps throughout a season. These are tough stretches. You’re (around) Game 60, and every team goes through it, and we’ll go through it now, and we’ll dig ourselves out it.”

“We’ve talked internally,” added Stamkos. “We know what we have to do. These are the little adverse moments throughout the season. It’s nothing to panic about. Lots of times throughout the course of seasons, even the seasons that we won, things like this have happened. It’s about learning from mistakes that you make in the games and just executing better.”

Edmonton, which began Friday’s action two points behind third-place Vegas in the Pacific Division, comes in after snapping a three-game losing streak with a 4-3 overtime victory over visiting Washington on Wednesday.

Connor McDavid scored the game-winner when he finished a 2-on-1 rush with Leon Draisaitl against Capitals center Lars Eller by firing a low shot past Ilya Samsonov for his 30th goal of the season.

“You know me. I’m just trying to get him the puck. You always want to get ‘Leo’ the puck in those types of situations, and I thought Eller played it pretty well,” McDavid said. “We didn’t have a ton of speed, all three of us, so (Eller) kind of just stood in the middle, and I just tried to take the shot that was there.”

McDavid, who also had an assist, has 81 points this season, his sixth straight season with at least 81 points.