Check in here for the latest Los Angeles Rams rumors, as head coach Sean McVay tries to deliver a Super Bowl with a strong core of star players. 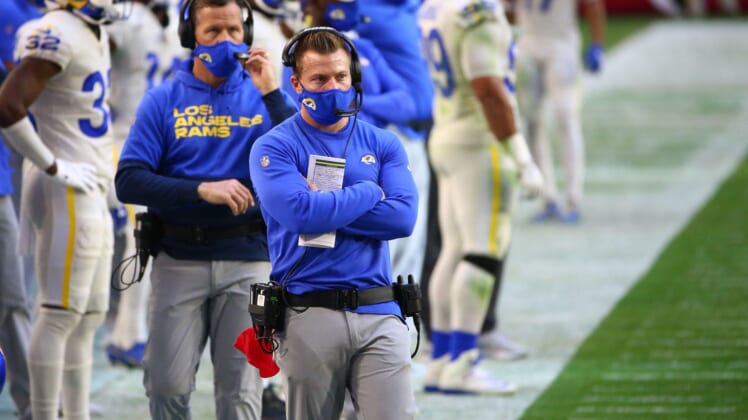 The Los Angeles Rams are considered a serious Super Bowl LV contender, and defensive coordinator Brandon Staley is a big reason why.

Rumor has it that the 38-year-old wunderkind is at least going to get a serious look at head coach openings this offseason through multiple interviews.

Although he may be considered too young on the surface, NFL Network insider Ian Rapoport insists Staley could be the next coach to quickly ascend the NFL ranks:

To springboard off this Staley momentum, the Los Angeles Times‘ Gary Klein did a piece on the coordinator’s prospective head coach candidacy. The Rams made a bold move hiring Sean McVay so young, and even he can see why his prized assistant would leave after only one season.

“Even though the Rams would get worse, that’s what it’s about. And if that’s something that he wants to do, and he gets an opportunity to compete for the job, there’s no doubt in my mind he’ll do a great job,” McVay said.

Staley is from the coaching tree of Denver Broncos boss Vic Fangio. Admittedly, that’s not been a wellspring of coaching talent to draw from in the past, yet Staley is deploying similar schemes to Fangio’s with his own wrinkles. It’s resulted in Los Angeles fielding the NFL’s top defense this season in terms of yards allowed per game.

Thanks largely to what the Rams did in landing McVay, the NFL-wide trend at the minute is to hire the next bright offensive mind. Fangio is one of the rare defensive coaches to be hired of late when he signed on with the Denver Broncos prior to 2019. Staley worked under Fangio in Chicago when the Bears had an elite defense spearheaded by Khalil Mack.

The dominant narrative surrounding the Rams is how much of an offensive genius McVay is. While that still holds true, really, it’s Staley who has taken Los Angeles to another level with his schematic acumen on the other side of the ball.

Superstar defensive lineman Aaron Donald is always going to be a problem for opponents to deal with. He’s critical to the Rams’ success.

That said, Los Angeles general manager Les Snead didn’t really make any splashy offseason additions to his defense. Staley was new to the team, and didn’t have a proper offseason, training camp or preseason to install his new system. With all that working against him, Staley lifted LA’s secondary to another level and vastly improved the Rams’ sieve of a run defense.

McVay initially arrived in L.A. with Wade Phillips as his defensive coordinator, and the latter’s wealth of head coaching experience definitely helped at the start of the tenure. Now, someone as brilliant as Staley may be out after one year, leaving McVay to find an exceptional replacement.

There should be plenty of interest to join McVay’s staff given his track record of success. However, striking gold a third time after Phillips and Staley is asking a lot.

As for Staley, leaving for the right offer is important, but there should be some appealing vacancies to consider. The New York Jets with presumptive No. 1 overall pick Trevor Lawrence and the Houston Texans with Deshaun Watson come to mind as suitors who need defensive help but are set at the all-important quarterback position.

Related: 5 moves that must be made to accelerate New York Jets rebuild