Can the Los Angeles Rams actually pull off a Matthew Stafford trade? Well, they're giving it a real shot amid an eager effort to move off Jared Goff in 2021. 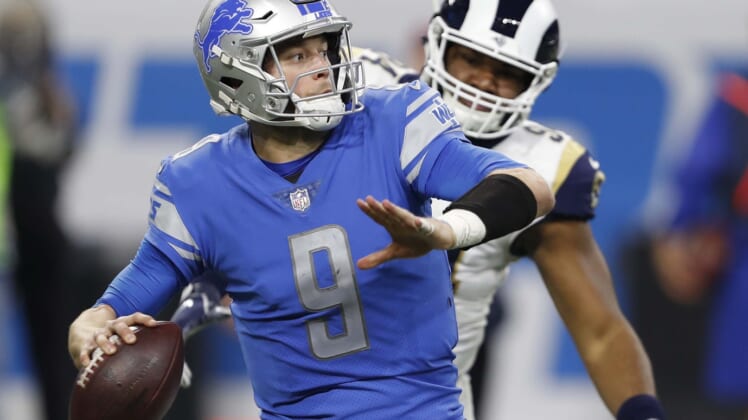 The Los Angeles Rams have reportedly been in contact with the Detroit Lions about trading for Matthew Stafford, as the organization is leaving no stone unturned in an attempt to move on from Jared Goff.

Stafford has spent the past dozen seasons in Detroit, but formally requested to be dealt from the Lions, and is one of the most buzzed-about trade candidates in recent memory.

According to ESPN’s Jeremy Fowler, LA is indeed in touch with the Lions about how to acquire Stafford. Fowler made particular note of the obvious front office connection in play. New Detroit general manager Brad Holmes spent years with the Rams organization prior to taking charge of the Lions’ personnel this offseason.

Goff’s contract is definitely a hurdle to overcome, yet it’s not impossible for Los Angeles to cut a deal and probably make a significant improvement at quarterback with Stafford running coach Sean McVay’s offense.

Whereas Goff was rated as Pro Football Focus’ 22nd-ranked quarterback in 2020, Stafford checked in far higher:

Imagine what the 10-6 Rams could be next season with Stafford’s far superior arm talent and mobility leading the charge.

There could be better bargains awaiting LA on the free agent market who could provide competition for Goff. Former NFL MVP Cam Newton is someone who comes to mind. In any event, it seems like McVay and Rams GM Les Snead are being proactive to upgrade the most vital position on the field by pursuing Stafford — despite the steep costs that could come with such a transaction.

Here’s the kicker that could nix any possible trade chatter, though: Holmes has spent more time around Goff than anyone in Detroit. Does he view Goff as a long-term potential replacement for Stafford, or a stopgap option for the 2021 season that will eventually lead to a superior solution to the quarterback position in 2022?

Armed with the No. 1 defense in the NFL this past season, along with Cooper Kupp and Robert Woods at receiver and a deep backfield to support him, Goff was wildly underwhelming, despite leading the Rams to the playoffs for a third time in the past four seasons.

Stafford has never played with such an exceptional defense in Detroit, nor has he had a steady rushing attack to complement him. McVay’s QB-friendly offense and the big market of Los Angeles offer obvious appeal to Stafford, as does the chance to contend for the postseason instead of enduring another Lions rebuild and regime change.

The salary cap implications are important to consider here, too. LA is projected to be more than $27 million in the hole in 2021, while the Lions aren’t much better off, with a mere $8.56 million in cap room.

It’s always possible that Stafford or Goff could restructure their contracts to help a trade go over more smoothly.

With several other teams in the running for the Stafford sweepstakes, including the NFC West division rival San Francisco 49ers, if the Rams want Detroit’s longtime QB, they’ll likely have to move quickly, which means Goff and Stafford almost have to be willing to alter their contracts to make everything work.