Jared Goff, Rams falling apart at the seams with no relief in sight 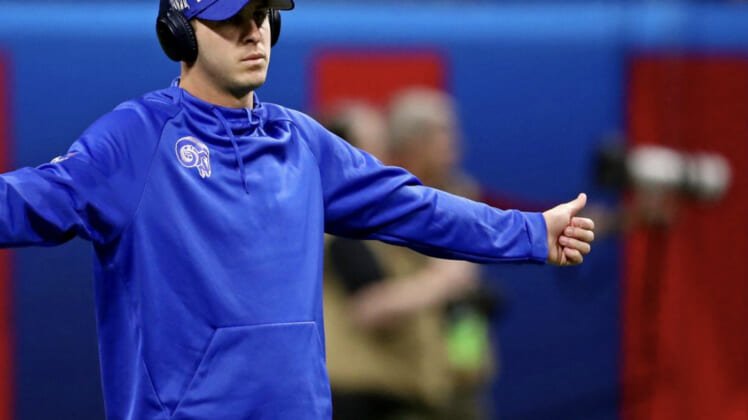 The Los Angeles Rams almost reached the pinnacle of the NFL in Super Bowl LIII, but their 2019 season has been nothing short of a disaster. Where did it all go wrong?

The big picture: A franchise that has pushed all of its chips to the middle of the table with a Super Bowl-or-bust mentality, has gone bust.

As always, it started with a quarterback.

Twice mistaken: The Rams have made two huge mistakes as it concerns Jared Goff. Here, we’ll examine what they were, and how it’s hurt the franchise.

At the time of the trade, we wrote that the Titans fleeced the Rams — a sentiment that still holds water.

However, Goff had a strong 2018 season (until the playoffs), and the Rams felt good enough about him to make their second huge mistake.

To be quite fair, the Rams weren’t the only ones who were fooled by Goff — I must count myself among those who were believers.

But the way this young man has tanked in 2019 — after getting paid so handsomely, no less — is nothing short of a disaster for the Rams. In just about every conceivable way, Goff has regressed badly — having the worst season since his disastrous rookie campaign under Jeff Fisher.

A millstone around the franchise’s neck. That’s what Goff represents to the Rams if he cannot find a way out of his funk and starts to play like the franchise quarterback he has been paid to be.

The Rams are on the hook to pay Goff some big money in coming years. Here’s a look at the cap hit Goff represents, along with the dead cap he’d cost if the Rams released him (h/t Spotrac).

As noted by Spotrac, the Rams can get out of Goff’s contract ahead of the 2023 season for the price of $5 million.

Essentially, the Rams are stuck with Goff.

Bold moves haven’t paid off: Rams general manager Les Snead has been swinging for the fences with huge moves. Unfortunately, he has struck out more than once. The big misses have furthermore cost the team future picks, will be keenly felt in the coming years.

Here’s a look at the biggest moves made by Snead in the past two years, and how they have played out.

One could say Snead’s moves in 2018 paid off big time. After all, the Rams did make it to the Super Bowl.

Yet in hindsight, it’s clear that the flurry of extensions and trades were not beneficial to the Rams long term.

Both Peters and Talib are gone. Talib’s career is likely over after he was traded to Miami earlier this year. The Rams traded Peters to the Baltimore Ravens this fall so that they could then acquire Jalen Ramsey from the Jaguars — a move that seems to have only benefited the Ravens.

Cooks was a productive receiver last year, but he’s struggled in 2019, and suffered a concussion that kept him out for weeks.

The Gurley contract was another that is just crippling the Rams. He’s not been the same guy who dominated since early last year. And it’s hard to imagine he ever will be again due to his nagging knee issues.

The Rams had to pay Donald. He’s still as dominant as ever. Yet with so many other albatross contracts on the books the Rams are in deep trouble.

Compounding the issue: Making matters worse, in addition to the bloated contracts atop the Rams’ books — with struggling quarterback Jared Goff being the biggest issue — the team has exhausted much of its draft capital in coming seasons.

All those trades we detailed above came with a cost. And it’s going to be one that hurts this team for a while.

Barring a trade-up scenario (which would further continue this trend of mortgaging the future for the now), the Rams won’t have a first-round pick until 2022. That would mean five straight seasons without a top-32 selection.

The bottom line: For a team that obviously has holes to fill right now, the future looks extremely bleak.

If Goff continues to spiral, this entire franchise is liable to spiral down with him.