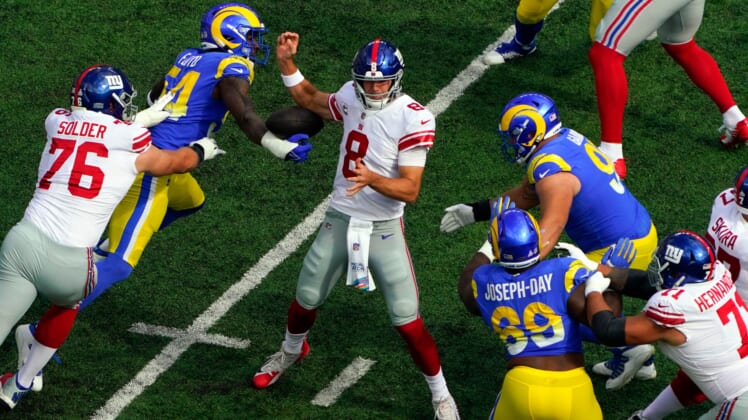 Sunday was supposed to be a joyous day for New York Giants fans as the team honored the 10-year anniversary of the Super Bowl 46 championship team.

But the halftime ceremony to honor one of the greatest teams in the franchise history was overshadowed the abysmal performance by the current Giants. With legends watching them, New York was thoroughly embarrassed by the Los Angeles Rams 38-11.

The only bright spot for Big Blue on Sunday was the game-opening drive. But after finishing off a 14-play, 73-yard drive with a field goal, Kadarius Toney left the game after re-aggravating his ankle injury and things only got worse from there. 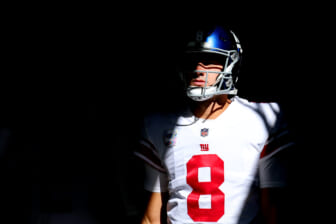 From that point on, the Rams dominated in every facet of the game. Los Angeles would go on to score 38 unanswered points, including 28 points in the second quarter.

The Giants defense was also ineffective stopping the run as the Rams rushed for 131 yards on 34 carries and a touchdown.

After suffering a concussion last week against the Cowboys, quarterback Daniel Jones had arguably the worst game of his career, which is saying something. He completed just 29-of-51 passes for 242 yards and three interceptions. He also fumbled twice, losing one of them.

Sunday’s embarrassing performance was by far the worst game of the Joe Judge era and has people wondering how long his era will last.

The biggest problem for the Giants remains the offensive line, which is something general manager Dave Gettleman said he would fix when he took the job in 2017.

Aaron Donald and the rest of the Rams defensive front seven dominated the decimated Giants offensive line and sacked Jones four times and pressured him constantly.

There was more bad news on the injury front as in addition to Toney, left tackle Andrew Thomas, Danny Shelton, and C.J. Board all left the game with injuries. Board season is likely over after it was revealed that he suffered a broken arm.

The Giants are now 1-5 and the schedule doesn’t get any easier as they do not play a team that currently has a losing record, until they play the Philadelphia Eagles on November 28th.

If the loss to the Rams is any indication of what to expect over the remaining 11 games, the Giants are on their way to a fifth consecutive season with double-digit losses.