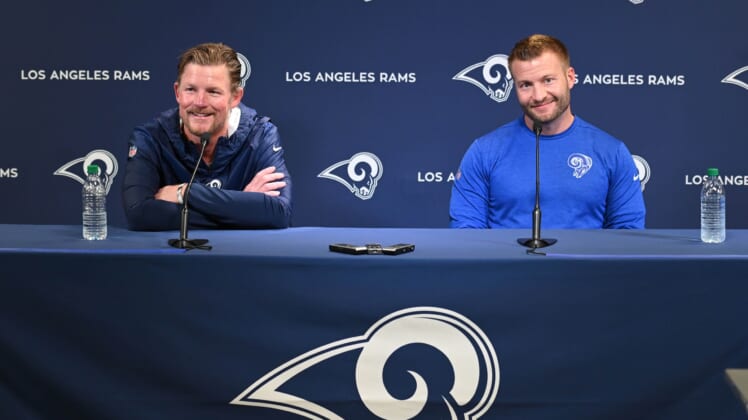 The Los Angeles Rams have had a policy of winning right away and mortgaging their future, which would’ve left their cupboard of 2021 NFL Draft picks almost completely empty.

However, thanks to the Lions hiring Brad Holmes as their new general manager and Dante Fowler Jr. signing with Atlanta last offseason, the Rams picked up two third-round compensatory picks in the 2021 draft, per Over the Cap, along with a fourth-round comp selection.

Los Angeles is absolutely loaded, and upgraded at the most vital position by trading quarterback Jared Goff to Detroit in a deal to land Matthew Stafford, which made full use of that Holmes front office connection.

We’ll take a look at who LA could target in the 2021 draft with its picks, and outline an ideal mock scenario.

Holland shined for the Ducks in college as a safety and a slot cornerback — both of which are among the biggest needs for Los Angeles. Instead of trying to count on re-signing Darious Williams or John Johnson, the Rams could decide to plug Holland into the starting lineup. Now, with that comes a considerable risk, and the hope is that GM Les Snead can retain at least one from the Williams-Johnson duo.

Having someone like Jalen Ramsey at cornerback can compensate for a lot of issues on the back end, so expect Williams or Johnson to walk and for LA to target Holland in Round 2 regardless of who leaves.

Yours truly likes Cox more than all the other second-tier linebacker prospects. Someone like Zaven Collins isn’t likely to be available here, and Cox is an excellent coverage linebacker whose ability to contribute right away and play the run will both be aided by the fact that the Rams have Aaron Donald in the trenches wreaking absolute havoc on any given play.

Smith is someone who could really make for a nasty run blocker that the Rams need on the interior. Center Austin Blythe is a free agent, so plugging in someone like Smith in and sliding, perhaps, Austin Corbett over to center may be what the offense needs to do. However, that’s further down the priority list with the Rams’ top draft pick.

If the Rams don’t want to move around too many parts on their o-line given the unit’s collective improvement from 2019 to last season, it might make more sense to either re-sign Blythe if at all possible, or pick up someone like Meinerz near the end of Day 2.

Due to Meinerz hailing from an unheralded program, teams are probably going to be reticent about drafting him until around this time. That said, the Wisconsin-Whitewater product skyrocketed up draft boards with his performance at the Senior Bowl, and as the image above shows, he’s more than capable of taking on NFL-caliber defenders like Washington’s Levi Onwuzurike.

Much of who Los Angeles targets in terms of defensive prospects depends on how much the scheme is to be altered next season. Brandon Staley was a one-year wunderkind at coordinator who parlayed that gig into the Chargers’ head coaching job. What will new coordinator Raheem Morris bring to the fold? Either way, it’d be nice to have an edge player like Rashed, who in 2019 had 22.5 tackles for loss and 14 sacks.

TCU’s Washington will be overshadowed because of his slight frame and the superiority of his Horned Frogs teammate Trevon Moehrig as a safety prospect. Nevertheless, he’s a fierce, physical defender with great ball skills and hitting ability who’d be similar to Oregon’s Holland in that he could play safety or slot corner in LA.

Finally, Long is a logical target to pursue if the Rams don’t retain free agent Gerald Everett. The offense has thrived with two viable tight ends, and Long offers a blocking skill set that should help Stafford and head coach Sean McVay when they dial up more downfield passes in 2021.

With five interceptions and four passes defensed in only seven games for the Spartans this past season, Brown had unbelievable ball production for such a small sample size. Whether that was a flash in the pan or a sign of things to come at the pro level, Michigan State’s declining reputation and the solid secondary depth of the 2021 class could make Brown a Day 3 steal.

Deablo had a nice interception on the great Trevor Lawrence in one of his highlight-reel college plays:

At 6-foot-3 and 223 pounds, Virginia Tech’s Deablo is uncommonly large for a safety prospect. In fact, he brings to mind another Hokies star who had to wait till the fifth round of 2010 to hear his name called: Kam Chancellor. Was he any good?

That’s not to say Deablo is going to go on to be a superstar on a Super Bowl winner like Chancellor was with the Seattle Seahawks. It’s just a fun bit of Virginia Tech alumni trivia — and the size similarities along with a high football IQ give Deablo at least some shared playing characteristics with Chancellor.

Now to Tulane’s Sample, who graded as PFF’s fifth-ranked edge defender in the country last season and has a thick enough frame to slide inside if need be. Imagine what Morris could dial up on third downs with the likes of Donald and Sample moving all across the defensive front.

To springboard off the last section: Sample’s play strength creates problems for opposing offensive tackles off the edge, and his versatility to slide inside and line up next to Donald makes him an appealing piece the Rams shouldn’t pass on in Round 4. Heck, he may even be worth a flier in the third round if LA gets the sense Sample’s name is generating buzz.

In an ideal third-round scenario, though, Snead and the personnel department pat themselves on the back in the war room for landing two extremely tough, relentless-motor players in Meinerz and Washington.

Both should have massive chips on their shoulder for different reasons. Meinerz was hardly on draft radars until his breakout Senior Bowl effort, while Washington has been doubted his whole life due to being undersized. Each of them would be huge assets to the Rams right away and into the future.

Based on the options available in Round 2 that we came up with, it’d be hard for Los Angeles to go wrong. Again, though, with Darious Williams and John Johnson possibly signing elsewhere, Holland has the game, schematic savvy and versatility to fill in.