Los Angeles Rams running back Cam Akers is out for the entire 2021 season with a torn Achilles.

According to multiple reports, Akers was injured Monday while training for the upcoming season.

The Rams’ leading rusher in 2020, Akers is likely to be replaced by Darrell Henderson in the starting backfield for Los Angeles.

Veteran help, via free agency or a trade, could be part of the expanded picture for the Rams. 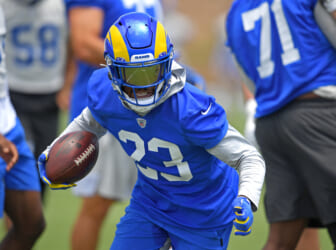 Among veterans still looking for work are Adrian Peterson, Le’Veon Bell and LeSean McCoy. Former Rams running back Todd Gurley reportedly agreed to a deal with the Baltimore Ravens this week.

A second-round pick out of Florida State, Akers had 625 rushing yards on 145 attempts and two touchdowns as a rookie.