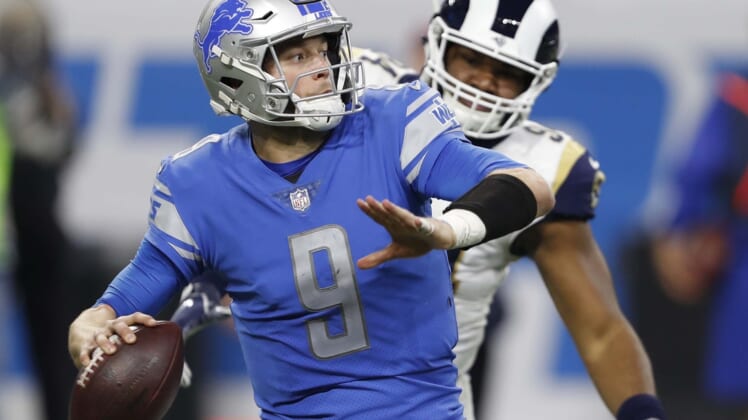 Stafford was traded to the Rams from the Detroit Lions, who received quarterback Jared Goff and multiple draft picks from Los Angeles. Detroit received a third-round draft pick in 2021 and first-round picks in 2022 and 2023.

The swap of former No. 1 picks represents a significant shift for both franchises. Goff took the Rams to the Super Bowl after the 2018 season.

Stafford was unable to lead the Lions to an NFC North division title and another regime change in the offseason brought first-time general manager Brad Holmes and first-time head coach Dan Campbell to Detroit.

The Rams also announced a four-year deal with pass rusher Leonard Floyd, which is reportedly worth $64 million.

Even with the additions, there were many key losses early in the offseason for Los Angeles.

Stafford currently has two years left on a team-friendly contract due to pay him a combined $43 million — $20 million this year and $23 million next year.

The Rams worked feverishly in recent weeks to reach full compliance with the 2021 salary cap, which includes charges of $20 million for Stafford and $22.2 million in “dead money” for Goff.

Likewise, the Lions are still being charged for Stafford ($19 million) and now take the $14.15 million hit for Goff.

The Rams and Lions got together again Wednesday to finalize a second trade that will send defensive tackle Michael Brockers to Detroit for a seventh-round pick in 2023. Brockers signed a three-year, $24 million deal prior to the 2020 season and is owed $8 million this season.

Rams general manager Les Snead also reworked deals for several high-priced players on the roster, including defensive tackle Aaron Donald and Jalen Ramsey, to clear a total of $30 million under the 2021 cap.