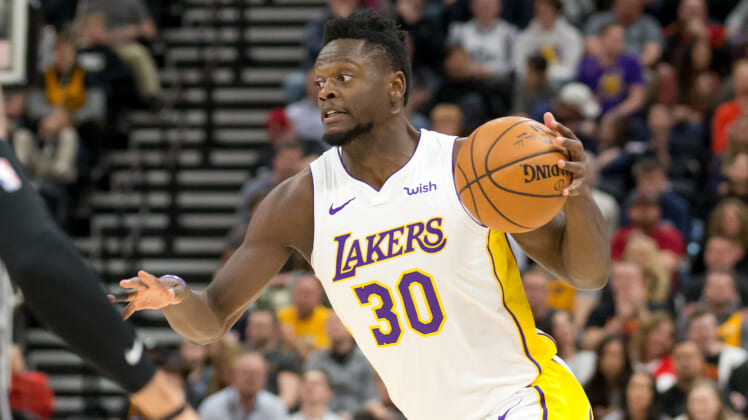 Aside from their coaching change, the Los Angeles Lakers are still looking into other ways to ensure their results in 2022 won’t match their performance in 2021. One interesting idea that an NBA insider recently dropped was a potential reunion with Julius Randle, who entered the league with the Lakers as the seventh overall pick in the 2014 NBA Draft.

The Lakers have also looked into a Kyrie Irving trade and several others, but the league seems to be at a standstill, waiting on a potential Kevin Durant deal instead. Another domino that could have a major impact elsewhere is a possible Donovan Mitchell trade.

This seems tied to a potential Russell Westbrook trade, but even he doesn’t appear to be a good fit for the New York Knicks either, in particular, his $47 million contract would be an issue, just as it would for many other teams.

If the Knicks acquire Mitchell and his $30 million salary in 2022, they’d also have Mitchell Robinson making $17 million and Jalen Brunson at $27.7 million. Adding Westbrook’s $47 million on top of all that? It just doesn’t add up.

Of course for the Lakers, this sounds nice. Having Randle would appear to be an instant upgrade over Westbrook, and his $23.7 million salary would be over $20 million cheaper than Westbrook’s, but he’s still a strange fit next to Anthony Davis. Randle is not a center and Davis prefers to operate as the power forward. This is a clunky fit, but maybe it’s one head coach Darvin Ham wants to try.

Either way, this appears to be a major longshot, as it centers on the Knicks landing Mitchell, and then also being willing to part with an important part of their core, in Randle. Though he’s not untradeable, he may very well already be on the trade block, it doesn’t mean the Knicks are willing to get rid of him for Westbrook.