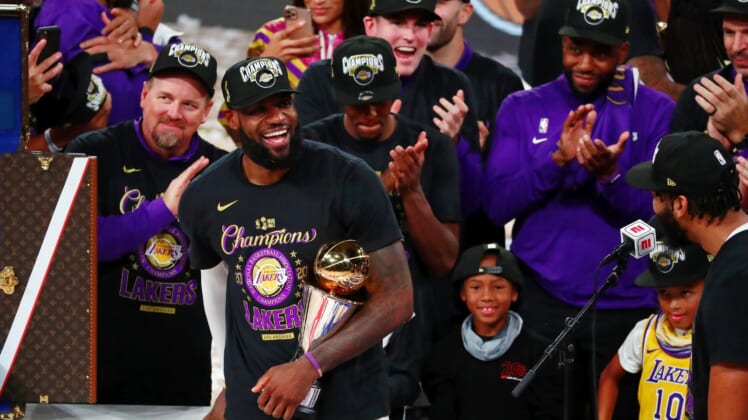 The Los Angeles Lakers are coming off their first NBA title in a decade after defeating the Miami Heat in Game 6 of the NBA Finals Sunday evening.

It’s a season that started almost one calendar year before it concluded. The Lakers themselves joined other NBA teams in seeing the season suspended for more then five months due to the COVID-19 pandemic.

Unfortunately, the Lakers will not be able to celebrate with their fans in Los Angeles when the team returns home from Orlando’s bubble inside Walt Disney World.

According to TMZ Sports, several ideas were kicked around to host a different type of parade for the Lakers and their fans amid the pandemic. That included an in-car celebration. However, all of these plans were scrapped. The Lakers want a true parade through the streets of Los Angeles.

This is not going to happen until county and city officials in Southern California give the all clear. That likely means when COVID-related restrictions are lifted in the state.

Southern California still has some of the strictest COVID protocols around the United States. That includes indoor dining, in-person classes, bars and larger outdoor gatherings being banned. Sports teams in California have yet to host fans at games since the pandemic started.

It was just last week that Los Angeles County Health Officer Muntu Davis noted that he fully understands fans wanting to celebrate, but the pandemic must take on greater importance right now.

Lakers title parade could be worth the wait

This won’t be your typical championship parade. Lakers fans were unable to attend games inside the Orlando bubble as their team won its first NBA title in a decade. The backdrop here is an ongoing pandemic continuing to grow in size in the United States.

As for the Lakers and their fans, the death of Kobe Bryant early this year adds an entirely new layer to everything. They want to celebrate together. Pay homage to the all-time great Lakers legend. Show their support for his widow and remaining children.

Once the air is clear as it relates to the pandemic, whenever that might be, Los Angeles is going to have one major block party. It’s deserved in more ways than one.