Without LeBron James (ankle) in the mix on Sunday, the Los Angeles Lakers dropped their sixth consecutive game.

Los Angeles battled hard at home against a superior Denver Nuggets squad, losing by the score of 129-118.

It was the Lakers’ defense that struggled once again as this team inches closer to missing out on a play-in spot out west.

Denver shot 57% from the field, including a 39% mark from three-point range. It also put up a resounding 33 assists on 47 made shots.

What’s the moral of the story for the Los Angeles Lakers here? Well, it’s pretty simply. Despite Anthony Davis and Russell Westbrook combining for 55 points, Los Angeles dropped its sixth consecutive game. It now sits at a disastrous 31-47 and on the outside looking in when it comes to a play-in spot in the Western Conference.

As noted above, King James missed Sunday’s game against the Nuggets with an ankle injury. This comes after he suited up in Friday night’s loss to the New Orleans Pelicans.

According to Lakers head coach Frank Vogel, James will be day-to-day as the regular season comes to a conclusion over the next week.

“Had ankle soreness from the other night. This is essentially like a back-to-back with the early start, and we won’t be with him today.”

The Lakers fell to 6-16 in games that James has missed this season. They are 25-31 in games he plays in. Neither number is good for a team that headed into the 2021-22 NBA season with realistic title expectations after acquiring Westbrook in a blockbuster trade last summer.

As for the Lakers, they have four games remaining on their schedule. Three of them come against top-end squads in the Western Conference.

Having posted a 15-33 record in their past 48 games, there’s no reason to believe that the Lakers will be able to win any of these three road games. It also must be noted that even if James suits up against the Suns and Warriors, he’s unlikely to play April 8 against the Thunder .

It was noted following the February 10 NBA trade deadline that Russell Westbrook was highly unlikely to return to the Lakers for the 2022-23 season. Whether its via a buyout or a trade, the Lakers will move off the struggling former NBA MVP in short order.

Given the number of veterans the Lakers signed to one-year deals last summer, they have only four players under contract for the 2022-23 campaign.

Meanwhile, one recent report suggests that the Lakers will at least entertain the idea of trading injury-plagued star big man Anthony Davis.

What does this all mean? We’re expecting a dramatic roster overhaul behind King James during the summer. We’re also expecting Vogel to be out of a job. 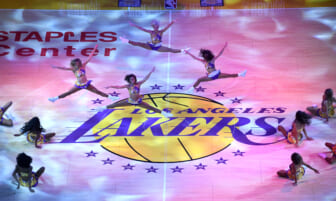 Potentially set to lose 50 games this season, that’s what happens when one of the most historical organizations takes a step back like we’ve seen recently.