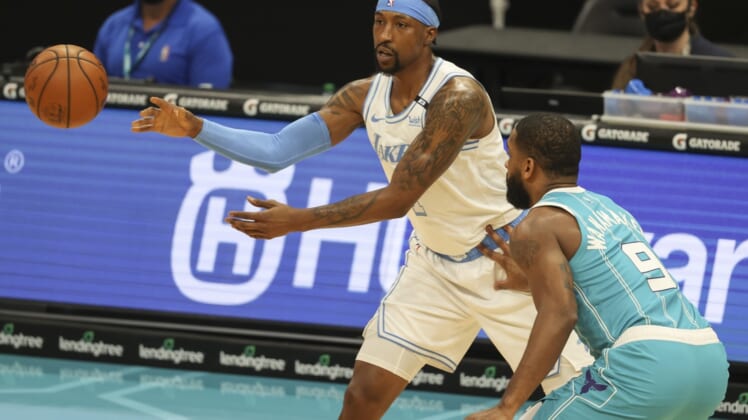 Kyle Kuzma scored 24 points and the Los Angeles Lakers wrapped up a road trip by defeating the host Charlotte Hornets 101-93 on Tuesday night.

The Lakers weren’t exactly clicking on offense, but they bounced back from a loss to the New York Knicks a night earlier and finished with a 4-3 record on the road stretch.

Alex Caruso made key contributions in the last minute, finishing with 13 points and six assists off the Los Angeles bench.

Dennis Schroder posted 19 points for Los Angeles, which shot 41.5 percent from the field. The Lakers hit 17 of 18 free throws.

Devonte’ Graham poured in 19 points for Charlotte. Caleb Martin racked up 17 points in a rare starting role and Jalen McDaniels, also a recent addition to the starting lineup, had 16 points for the Hornets, who’ve lost both games since returning from a four-win six-game road stretch.

Miles Bridges added 13 points and Bismack Biyombo had 10 points and 12 rebounds for the Hornets, who hit just nine of 35 shots from 3-point range.

Still, Charlotte was within 89-83 with less than four minutes to play. Then the Hornets were within one point twice, both times after Graham buckets.

Caruso answered with a 3-pointer with 45 seconds left and then made a pair of free throws. Kuzma was 4-for-4 on free throws in the last 16 seconds to secure a two-game season sweep of Charlotte.

The Hornets didn’t score in the last two minutes Sunday vs. Atlanta and managed only two points in the final 1:50 on Tuesday night.

The Lakers began to pull away by midway through the fourth quarter, building their largest lead at the time at 85-75 on Schroder’s basket with 7:06 to play as the Hornets struggled on the offensive end.

Los Angeles had 11 turnovers, a significant improvement after 24 giveaways in the game with the Knicks.