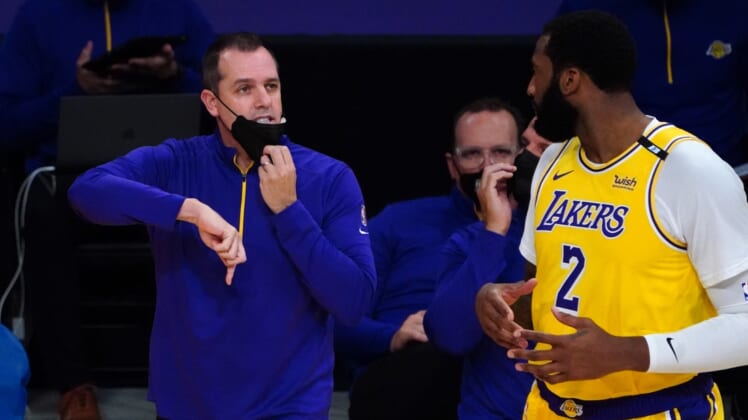 New Lakers center Andre Drummond is day to day after injuring his big right toe during his Los Angeles debut on Wednesday night.

Drummond played 14 minutes and scored four points in the game — his first action since Feb. 12, when the Cleveland Cavaliers sent him to the bench, seeking a trade. He signed as a free agent with the Lakers after negotiating a buyout with Cleveland.

“Yeah, um, in the first quarter when I came out, I had got stepped — Brook had stepped on my foot, and I didn’t really think anything of it,” Drummond said. “I came back in the second quarter and it was hurting a little bit more. And then after halftime, I finally took my sock off to look and my whole toenail was gone. So, it was just all bad from there. I couldn’t walk or run. So, I just told coach (Frank Vogel) to take me out.”

“As of right now, I’m just going to just … what do you do for a toe? I don’t know,” Drummond said. “I’m not really sure what to do. I’m just going to talk to the training staff and find out what’s the best thing to do to get back as quick as possible.”

Drummond averaged 17.5 points and 13.5 rebounds in 25 starts for the Cavaliers this season.