The Los Angeles Lakers missed star big man Anthony Davis during their Game 5 loss to the Phoenix Suns in the first round of the NBA Playoffs Tuesday evening.

Davis is sidelined with a groin injury he suffered in the previous game. The end result was a 30-point Suns win and a 3-2 lead in the series. Heading into Game 6 in Los Angeles Thursday evening, Davis is expected to be a game-time decision. In fact, he’s listed as questionable for the pivotal matchup.

Davis talked about the injury and getting treatment since he went down in the first half of Game 4. He also made it clear that the decision will be completely up to the Lakers’ team doctors.

“Hopefully all the rehab and treatment that I’m doing pays off and the doctors clear me to go,” Davis told reporters on Wednesday. “That’s what we want. So, getting more treatment tonight, (Thursday) and kind of talk to the doctors before the game — before and after I shoot — and hopefully everything comes back good where they clear me. That’s what we’re hoping for.”

Davis said the groin injury was caused by hyperextending his left knee in Game 3. Davis is averaging 21.8 points, 8.0 rebounds and 3.0 assists per game in the series vs. the Suns. 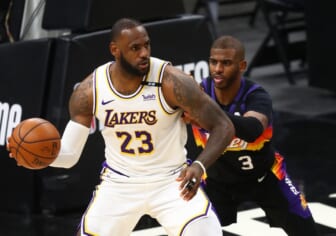 As for the Lakers, they are hoping to avoid becoming the seventh defending NBA champion to be eliminated in the first round of the playoffs the following season.

Wednesday’s loss to the Suns was especially bad given how poor LeBron James played without Anthony Davis in the lineup. Exploits from King James during the game added another layer to this. For example, failing to hustle back on defense throughout the blowout loss.

Whether Davis can go for Game 6 remains to be seen. But he’s highly unlikely to be at 100% if he does suit up. If the Lakers are able to pull off the win, they’ll force a do-or-die Game 7 in Phoenix on Saturday.