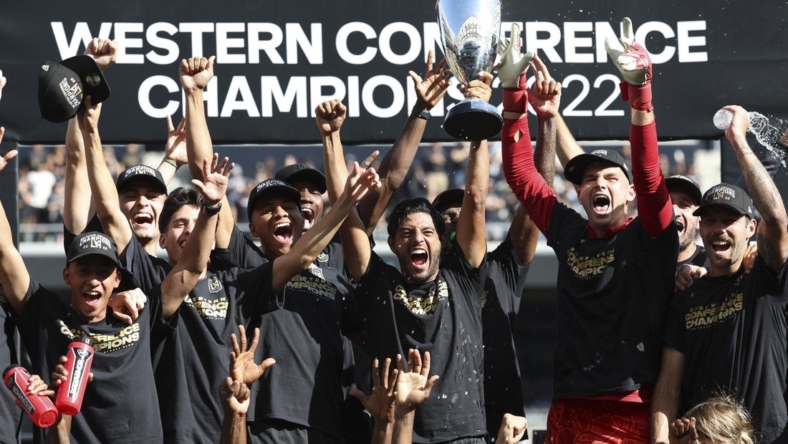 Between those goals, LAFC (21-9-4, 67 points) also scored from an own-goal on an early-second-half corner kick to make good on the promise they’ve shown, winning the MLS Supporters’ Shield for earning the best regular season record and leading the West since early May.

Twice, corners from LAFC’s first-ever player signing Carlos Vela led to goals for the home side, which delivered one of its best performances of the season.

West No. 2 seed Austin was outshot 22-7 overall and 10-1 in efforts on target as LAFC sealed the right to host the MLS Cup final next Saturday.

Austin goalkeeper Brad Stuver made seven saves to acquit himself well as the second-year club’s first playoff campaign came to an end.

Substitute forward Maxi Urruti stuck out in the opposite manner, accidentally turning the ball into his own net shortly after his introduction to put the game more or less out of reach.

Austin (16-10-8, 56 points) might have found a way back into the game had one key decision shortly after that own-goal gone their way.

Referee Armando Villareal was summoned by video assistant referee Timothy Ford to examine a potential penalty kick foul by LAFC defender Sebastian Ibeagha. But, perhaps surprisingly, he did not choose to point to the spot.

After a first half-hour of mostly one-way traffic, in which Vela struck the post in the 17th minute, Arango opened the scoring in the 29th.

He snuck away from marker Moussa Djitte at the back corner of the 6-yard box and flashed a quick header between Stuver and the left post.

It was 2-0 when Vela sent in another difficult inswinging ball. Urruti may have been screened on the play, and when the ball finally reached him it struck inadvertently off his head and inside the far post.

LAFC sealed things in the 80th minute when Opoku reached a pass that took a fortuitous bounce and hammered a low strike inside the right post from about 18 yards.