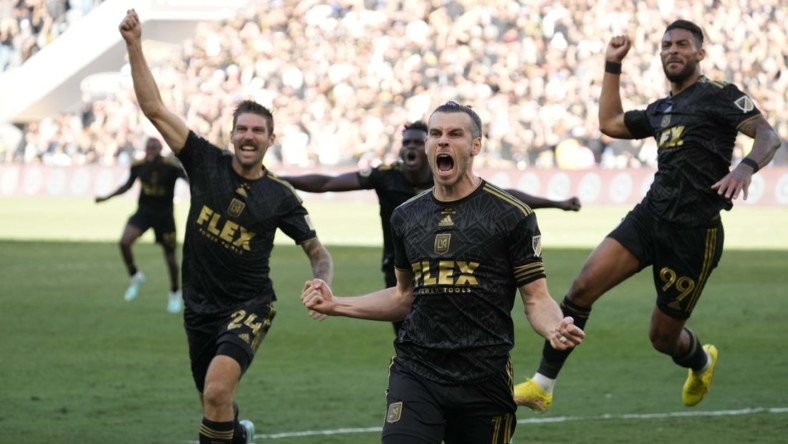 LOS ANGELES — Ilie Sanchez scored the game-winning goal in a penalty shootout and Los Angeles FC won their first MLS Cup title in their fifth season after a wild 3-3 tie in regulation and extra time.

John McCarthy made two diving saves in the shootout after entering the game late in the 30-minute extra time. He came on when starting LAFC goalkeeper Maxime Crepeau came away with a gruesome lower right leg injury after a collision with the Union’s Cory Burke.

Denis Bouanga and Ryan Hollingshead also scored in the penalty shootout as LAFC followed their Supporters’ Shield season with the championship.

Kellyn Acosta, Jesus Murillo scored in regulation time for LAFC, while Gareth Bale saved the team’s season with a score just before the final whistle, preventing the Union from winning the title. Philadelphia was attempting to win its first championship in its 13th season.

Jack Elliott scored two goals for the Union, while Daniel Gazdag also scored. The Union were off target in all three of their attempts in the penalty shootout, with Gazdag misfiring over the crossbar, while Jose Martinez and Kai Wagner had shots stopped by McCarthy.

The Union appeared to win it late in the 30-minute extra time when Elliott delivered after a scramble in front of the LAFC goal for a 3-2 lead. But four minutes later, Bale scored on a header off a pass from Diego Palacios to send the game into a penalty shootout.

The goal came in Bale’s first game since he played five minutes on Oct. 2 and just the third time the renown international from Wales was available off the bench.

Crepeau was given a red card as LAFC played the last 12 minutes of extra time with 10 men, although the goalkeeper’s foul prevented Burke from running onto a loose ball and potentially scoring the go-ahead goal.

It was the first time since 2003 the MLS Cup final was contested between the league’s top two teams. The San Jose Earthquakes defeated the Chicago Fire 4-2 in that one.