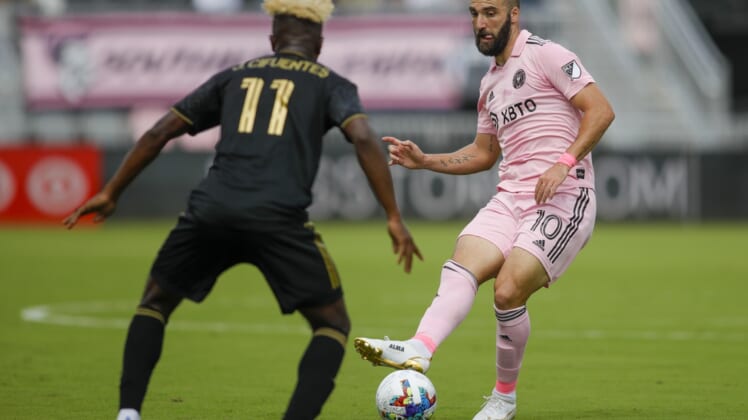 It was the first goal of the season for both attackers as LAFC (2-0-1, 7 points) remained unbeaten following its first road match of the season, and its first match in the Eastern Time Zone since the 2020 MLS is Back Tournament.

Carlos Vela, the 2019 MLS MVP, contributed to Opoku’s opener and played 70 minutes after he had to leave last week’s 1-1 draw against Portland at halftime as an injury precaution.

Brek Shea was sent off shortly after Opoku’s goal for Miami (0-2-1, 1 point), which was shut out at home for the second time this season.

The Herons still have a ways to go to match last year’s early futility, when they went winless in their first seven home matches, losing five and drawing two.

Miami was the better side for most of the first half, but struggled to convert an abundance of possession into chances. The hosts’ first shot on target came in the 40th minute, when Jean Mota’s curler forced Maxime Crepeau to push the ball over the bar.

Then LAFC went ahead five minutes later on what was basically a broken play.

Vela tried to play a through-ball into the Miami penalty area, and a Miami defender blocked the ball directly into Opoku’s path.

Defender Damion Lowe retreated to try and guard the passing lane, so Opoku instead drove a firm finish beyond goalkeeper Clement Diop from close range.

It got worse for Miami in first-half stoppage time, when Shea was sent off for pulling down Brian Rodriguez on a breakaway to deny an obvious goal-scoring opportunity.

The visitors mostly controlled the second half and doubled their lead in the 82nd minute. Tajouri-Shradi curled in a free kick from the left wing. As Diop prepared for a redirection off one of several LAFC attackers in the area, the ball instead skipped past all of them and nestled into the far left corner.